A new study found that 2015’s charitable giving increased 1.6 percent over the previous year while online donations grew 9.2 percent in the same time frame. And don’t forget about mobile giving—14 percent of online donors are utilizing their smartphones and tablets.

“Charitable Giving Report: How Nonprofit Fundraising Performed in 2015,” an annual survey from Blackbaud, compiled data from more than 5,000 nonprofits that amassed $18.2 billion in donations, including about 4,000 nonprofits that submitted $2.2 billion in online funds. The survey deems itself the “largest analysis of overall and online giving data anywhere in the nonprofit sector.” 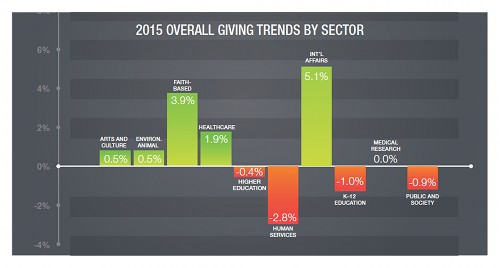 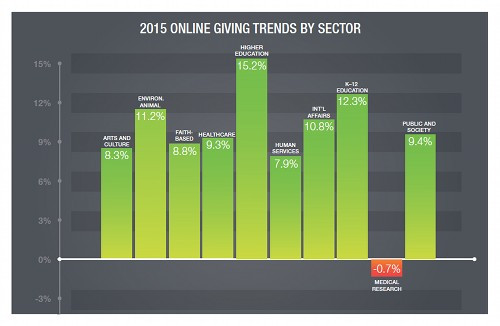 The online side saw more positive numbers as only the medical research sector saw a drop. Higher education captured the biggest increase in online giving for the second straight year, receiving 15.2 percent more online donations in 2015 than the prior year. K-12 education followed in second with 12.3 percent. Even ninth place, human services, had an impressive 7.9 percent growth. Of nonprofits’ donation totals, online giving averaged 7.1 percent, a slight increase over 2014. Small nonprofits dominated with 8.1 percent of donations coming from online donations. When comparing sectors, medical research organizations led the way with 17 percent of their donations online while health care fell slightly from its 2014 figure, ranking last in 2015 with 3.4 percent.

“The key metric for this [digital] transition is the percentage of total fundraising that comes from online giving,” the study indicated. “This metric can be used by nonprofit organizations to benchmark their online-giving performance against peer organizations within each sector or of a similar size.“

Although education dominated the top two spots for online giving growth, other sectors outperformed them when comparing online giving to total giving. K-12 education ranked fourth in a three-way tie with 7.6 percent, while higher education slightly bested health care with 3.8 percent. But Blackbaud has a positive outlook for these sectors.

There are other impressive trends in online giving too. Blackbaud estimated #GivingTuesday raised $39.6 million online—a 52 percent increase over 2014. The survey also, for the first time, tracked mobile giving and found 14 percent of organizations’ online giving was via mobile, based on the 1,190 organizations that shared mobile data. Apple products ruled those contributions with 43 percent using iPads and 42 percent utilizing iPhones.

“We are now past the mobile tipping point when it comes to digital giving,” the survey indicated. “Consumer behavior and donor behavior are inextricably linked as we move into the future of giving. Nonprofits must continue to invest and perfect how they engage donors using the right channel on the right device at the right time.”

To see the study, including month-by-month donation breakdowns, visit www.blackbaud.com.