No Debate: Businesses Support Trump, Nonprofits Support Clinton (And It's Not Close)

There's no debate, though, that the nonprofit sector largely supports Clinton.

A new study from NAPCO Media Research (NAPCO Media is the parent company of NonProfit PRO), "Make American Business Great Again: Corporate Leaders Choose Trump Over Clinton," surveyed executives across the printing, consumer electronics, promotional products and nonprofit industries to determine where each sector's political loyalties lie. Results showed that three of the four industries overwhelmingly support Trump, with 54 percent of all respondents saying they'd vote for him, compared to 32 percent for Clinton and 14 percent undecided.

The nonprofit sector bucked that trend. It was the only industry that favored Clinton, at 53 percent to Trump's 32 percent—almost the exact opposite of the other industries surveyed: 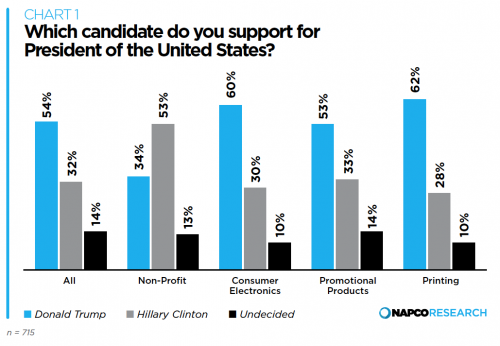 It's not exactly a surprise that the nonprofit sector leans left. But it is a bit surprising how many nonprofit Clinton supporters—38 percent—said they support her not because they believe in her as a candidate, but because she's the best of what's available. That's not exactly a ringing endorsement, and it says more about Trump than it does about Clinton.

Also a bit surprising were the reasons nonprofit respondents supported their preferred candidate: 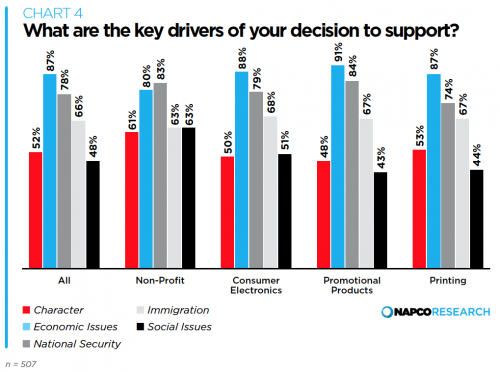 The 83 percent response for national security seems high for nonprofits, especially compared to the 63 percent response for social issues. Still, social issues are a significantly higher priority for nonprofits than for the other three sectors surveyed. Just 48 percent of all respondents cited it as a key driver—lowest among the five issues—with two sectors rating it below 45 percent.

Nonprofit was also alone among the four sectors in ranking Clinton ahead of Trump on the economy. The printing (70 percent), promotional products (67 percent) and consumer electronics (65 percent) industries all believed Trump is better for the U.S. economy, while 59 percent of nonprofits said Clinton was better.

The study is loaded with other info, so make sure you check out the full version. Click here or on the image below to download a PDF. 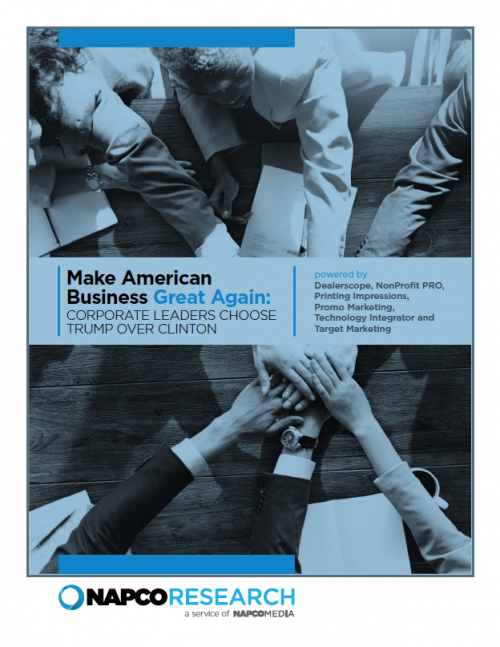