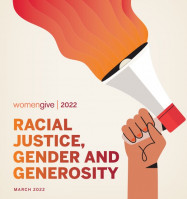 The Women’s Philanthropy Institute (WPI) today released Women Give 2022: Racial Justice, Gender and Generosity, a new report exploring how gender and demographic factors affected giving to racial justice causes in 2020 (such as Black Lives Matter, Say Her Name).The report finds that a significant portion of the population (42.0%) and nearly half of single women (48.2%) supported the 2020 racial justice protests, but a smaller portion of the population (14.2%) actually donated money in support of racial justice.

Women Give 2022, which is funded by a grant from the Bill & Melinda Gates Foundation, is the first study to explore attitudes toward the 2020 racial justice movement through a gender lens, examining who is giving, how much, and how that generosity relates to various demographic variables. The report finds that single women, Black households, LGBTQ+ households, and younger households demonstrated greater levels of support for the 2020 racial justice protests and were more likely to give money to these organizations.

“This report responds to a moment in time when many leaders and organizations made impressive commitments to advance racial justice. Women Give 2022 underscores the importance of moving people who broadly support these issues into action. Fundraisers and nonprofit leaders can use this research to better engage donors interested in racial equity. Likewise, donors can leverage the findings to refine their personal giving strategies,” said Jeannie Sager, Director of the Women’s Philanthropy Institute, a part of the Indiana University School of Philanthropy.

Previous research from WPI shows that a broader definition of generosity resonates with women and communities of color, and this was evident during the racial justice protests of 2020. Women Give 2022 highlights how women are more likely than men to view all of their resources—not just their money but also their time, expertise, and networks—as tools with which to do good.

“Despite being disproportionately impacted by the global pandemic, women of all backgrounds have contributed to racial justice movements in countless ways, from participating in marches, to financial support, to contacting elected officials to demand police accountability. While corporate and foundation pledges to racial justice have received significant attention, women have been supporting these efforts all along. As the philanthropic community continues to advance racial justice, it’s critical to consider the multitude of ways that donors show their generosity,” said Una Osili, Ph.D., Associate Dean for Research and International Programs at the Lilly Family School of Philanthropy.

The full list of findings from Women Give 2022 includes:

Women Give 2022 demonstrates the broad potential for increased generosity for racial justice initiatives. Understanding the importance of single women, Black households, and LGBTQ+ households in this philanthropic space, in particular, is crucial to moving these causes forward. The full report and visual summary are available here. An animated video of the findings is available here.

WPI’s signature report was released at an event hosted by sponsor Bank of America in Charlotte, North Carolina. “Bank of America is proud to support this important report given our long-standing commitment to advance racial equality and economic opportunity through direct actions, investments, and work to catalyze similar efforts across the private sector. This latest research will elevate and enhance the national conversation about racial justice organizations and the potential for providing both financial and non-financial support to help move these causes forward,” added Dianne Chipps Bailey, Managing Director and National Philanthropic Strategy Executive for Philanthropic Solutions at Bank of America Private Bank and Chair of The Women’s Philanthropy Institute Council.

Each year, WPI releases the latest in a series of Women Give reports, exploring unique questions about various factors that shape gender-based giving patterns—including age, religion, income, marital status and more—in order to increase understanding about how gender influences philanthropy. The full series of Women Give reports are available here.