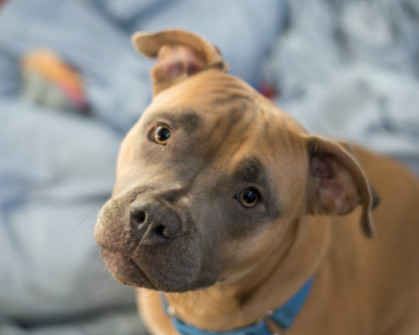 Nyx, a pit bull who is up for adoption at the Western Pennsylvania Humane Society

The executive director of an animal welfare nonprofit stepped down last month after being criticized for allegedly purchasing a puppy from a breeder instead of a shelter. Former employees and volunteers have described the decision as the final straw in a series of issues with the top executive.

Joy Braunstein led the Western Pennsylvania Humane Society (WPHS) for about a year when word got out that she allegedly had purchased a $1,000 collie puppy from a breeder instead of adopting one of the organization's rescue dogs, according to a Change.org petition that called for her removal as CEO.

"It is the height of hypocrisy to be the face of an organization that promotes adoption and combats overpopulation while purchasing a dog from a breeder," the petition read. "It is a slap in the face to the wonderful employees and volunteers at WPHS, animal rescuers everywhere, and, worst of all, the homeless dogs she has committed to serving."

Tara Vybiral created the petition, according to CBS Pittsburgh. She and Diane Bandy were charged with harassment for allegedly threatening Braunstein on social media, the Pittsburgh Post-Gazette reported. Despite the criminal charges, her efforts with the petition may have been effective in pushing the former executive director out.

Days after Vybiral created the petition against Braunstein, the nonprofit placed Braunstein on administrative leave, and Anya Dobratz created a counter Change.org petition, claiming Braunstein's personal life has no bearing on her professional life.

"We firmly believe that the purchase of a responsibly bred puppy is in no way grounds for the loss of any job, much less an attack on a person's character," Dobratz wrote in her petition.

Then, less than a week after the original petition circulated, Braunstein resigned.

“Given the present circumstances, I have made a personal choice to step away from the Western Pennsylvania Humane Society and resign [from] my position effective immediately out of respect for my family and out of respect for the organization," she said in a Feb. 5 statement to the Pittsburgh Post-Gazette. "… I want to thank the Western Pennsylvania Humane Society for my time there and everyone else for their concern, but I have no further comment.”

Two days earlier, she told the Pittsburgh Post-Gazette she acknowledged the online threats and defended herself.

“This is insane and ridiculous and scary," she said. "I have broken no laws. I have done nothing unethical. I have been a tireless advocate for animals. They need to stop bullying, they need to stop defaming my character. There is no real situation.”

Rick Cohen, director of communications for the National Council of Nonprofits, Washington, D.C., told NonProfit PRO that this is a bigger issue, largely impacted by social media, that affects companies even outside of the nonprofit realm—the blurring of the line between personal and professional. However, this isn't something easy for companies to tackle in advance.

"An employer imposing their ideals on somebody in their personal time—it's not something you want to get into in any line of work," Cohen said. "… It's almost impossible to draw clear lines to what behaviors are OK and what behaviors are not. It's a lot more difficult now with more of our personal lives being public, but it's really kind of dangerous territory."

However, the problem employees and volunteers had with Braunstein was much larger than it seemed. Vybiral told CBS Pittsburgh that there were many performance-related factors that started the outrage.

“It's really just the proverbial straw—that there were many things leading up to this, and a lot of people want to make it be just about [the breeder issue], but I would implore people to read the comments on the petition to see just how deep these roots run,” Vybiral said.

Barbara Holmes, a WPHS volunteer who commented on the petition, said:

"It is about her imperious 'my way or the highway' management style, her total lack of appreciation for volunteers, and, worst of all, her total lack of passion and concern for the animals. She also has serious ethical lapses. For example, she has taken attractive dogs on TV—[those] supposedly 'needing homes'—when they were already adopted or, worse, had never been at the shelter at all."

Holmes also claimed she had brought her concerns to the board, which backed Braunstein, in September.

The Pittsburgh Post-Gazette reported allegations that about one-third of the 60-person staff had either quit or was fired during Braunstein's tenure. Those who allegedly left included the chief operating officer; director of volunteer and foster programs; director of human resources; director of adoption, admissions and animal care; and director of marketing and public relations.

"If this was an isolated incident, I seriously doubt it would have resulted in anything more than a few people shaking their heads," Kristen Lane, former director of marketing and public relations, said in a petition comment. "However, many former WPHS employees, volunteers and shelter advocates view Ms. Braunstein's choice to 'shop instead of adopt' as the last straw in an extensive series of poor decisions."

Lane only worked under Braunstein for five months before she decided to quit without having a new job lined up. Some who did not quit were fired and replaced with Braunstein's friends, Lane said, adding that her actions also alienated volunteers.

"Prior to Ms. Braunstein joining the WPHS, I experienced a spirit of collegiality among staff, volunteers and adopters; a shared goal of working together to always do the best thing for the animals and those who wanted to adopt them," she said. "Ms. Braunstein crushed that collaborative and positive spirit by firing many highly capable and deeply respected staff members, and replacing them with her friends. I personally witnessed her acting dismissively toward long-time, valuable volunteers as well as making disparaging remarks about them. But perhaps most damaging to staff and volunteer morale was her practice of reserving the more desirable breeds for high-profile adopters, and subjecting less desirable breeds to a new behavioral evaluation process that led to euthanasia in high numbers.

"All of this lead to a great many staff and volunteers leaving the organization, some in disgust, some in anger, but all I suspect in despair over the fate of the animals they tried so valiantly to care for and protect."

"I resigned after losing all hope that the organization had a chance to succeed under her direction," the ex-director of volunteer and foster programs said. "In her mind, it is all about her and not the animals she is serving. This is a surefire recipe for disaster."

The breeder controversy seemed to get more attention than the internal struggles, which are common occurrences at any place of business, Cohen said. And what really happened at WPHS still isn't completely clear, with only bits and pieces reported, and various accusations posted on the Change.org petitions.

"It's impossible to pass judgement one way or the other on this situation or many other specific situations because we don't know what else was actually going on," Cohen said. "I think the bottom line is that sometimes there's perception that feeds into another narrative of something that's going on, and it's something that any nonprofit employee needs to consider because, at the end of the day, it's not about any one person—it's about the mission of that organization, and any sort of negative publicity like this hurts the ability of the organization to accomplish its mission."

Negative perception for a nonprofit affects more than just what other think of that particular organization—it affects how donors think of nonprofits in general, which could translate to fewer donations and less money for the mission.

"Those are dollars that aren't coming in, and in this case, that's animals not finding a home," Cohen said. "In other cases, it's people without a roof over their heads or food in their stomachs. The big thing is that nonprofits operate on public trust, and any kind of news stories damage that public trust—and not just for the organization itself that's in the news."