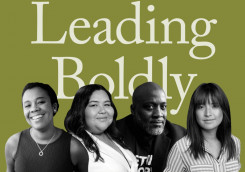 There has been a heightened awareness and a greater sense of urgency of the need to address the inequities laid bare by a cascade of crises in recent years. This has highlighted the work of leaders on the frontlines for social change. Leading Boldly, The USC Center on Philanthropy & Public Policy’s new series, focuses on emerging leaders who are working on an array of issues and varying approaches to create a more equitable society.

Four remarkable leaders, whose life experiences give them inspiration and strength, share their personal stories and reflect on their leadership journeys in conversations with Fred Ali, the retired President and CEO of the Weingart Foundation, and a former nonprofit leader. The interviews are inspired by the words of Booker T. Washington, “Success is to be measured not so much by the position that one has reached in life as by the obstacles which he has overcome while trying to succeed.”

Desmond Meade, the president of the Florida Rights Restoration Commission, overcame drug addiction, homelessness, and incarceration to lead one of the most inspiring and successful grassroots campaigns in history, the Amendment 4 campaign to restore voting rights to over 1.4 million “returning citizens” in Florida.

Greisa Martinez Rosas, the executive director of United We Dream, immigrated from Mexico to the US with her family when she was eight years has overcome challenging life experiences to commit to a life of activism and organizing, becoming a strong intersectional voice for equity and justice.

Phi Nguyen, the executive director of Asian Americans Advancing Justice – Atlanta since 2021, chose to leave a successful private law practice to dedicate herself to reducing the barriers to inclusion and voting rights and fight Anti-Asian hate in the months after the murder of eight women, six Asian, at three spas in metropolitan Atlanta.

Reverend Jennifer Bailey, a public theologian and founding executive director of the Faith Matter’s Network, has emerged as a leading voice in the healing justice movement, offering support and radical hope to community organizers, clergy and other activists from across the nation.

These leaders recount their compelling life experiences, revealing their motivation and commitment for the work they do, as well their reflections on the challenges and opportunities ahead. “Over 40 years of social justice work has taught me that leadership either plays a critical role in advancing racial justice, or reinforces existing patterns of inequality and structural racism,” Ali notes.

The series also provides insights that will help philanthropy empower leaders on the front lines of social change. “Philanthropy can play an important role by encouraging bold action for change and investing in emerging leaders,” notes The Center’s Director James M. Ferris. “We believe that the next frontier for social impact is bold leadership. And it is important to recognize that such leadership comes from all quarters, especially from unsuspecting places.”

The series is underwritten by Bank of America and the Weingart Foundation.