Other than Leonardo DiCaprio finally winning an Oscar, the most talked-about moment at last month's 88th Academy Awards was Girl Scouts of Greater Los Angeles (GSGLA)—with host Chris Rock as pitchman—raising $65,243 through cookie sales to the audience of hungry A-list celebrities. It was a fun diversion from the otherwise weirdly tense vibe surrounding the ceremony, and it was some welcome positive publicity for the Girl Scouts following the criticism out of St. Louis.

There was some minor controversy over that dollar figure after the show—TMZ did the math and found that the troop sold 500 boxes of cookies at $5 a box, for an actual total of $2,500—but that was seemingly resolved when the Girl Scouts clarified that the $65,243 included cookie sales and a big donation from the Academy of Motion Picture Arts and Sciences, which oversees the Oscars. Makes sense. Problem solved, right?

Maybe not. On Friday, TMZ reported that the money still hadn't made its way to GSGLA, and that, well, no one really knew where it was:

The Oscars or the Girl Scouts—or some mystery benefactor—is hanging 28 little girls out to dry after swearing Chris Rock's bit earned $65,000. We've learned the money is nowhere to be found.

You'll recall Rock and the Oscars got Inglewood, California's Girl Scouts Troop 5215 to work the crowd of celebs, hawking Thin Mints, Tagalongs and more. Near the end of the show, Chris said they raised $65,000.

But Latoya Edwards, whose daughter is in Troop 5215, tells TMZ someone's screwing them over. She claims the National Girl Scout Council informed them the academy would be donating the $65,000 to the Greater L.A. Council. But that hasn't happened, and the academy isn't returning calls.

Now, there's a fairly obvious explanation here. A large organization, like the Academy of Motion Picture Arts and Sciences, can't just hand over $65,243—there's billing and accounting to take care of first. And once the money changes hands, GSGLA would need time to process the donation before making it available for use. It's been a little more than two weeks since the Oscars, so it's not quite time to panic, yet.

Still, it's a bit disconcerting that, as of Friday morning, there had been no definitive answer on the whereabouts of the funds. Girl Scouts of the USA told TMZ only that "the donation process is determined by local councils," while the academy had not responded to TMZ's requests for comment. It's easy to see why Edwards and other scout leaders were concerned.

But, finally, some clarity. Late Friday, Variety reported that the donation is still happening—it's just been a bit delayed.

“Of course we have every intention of honoring our commitment to the Girl Scouts,” a spokesperson at the Academy of Motion Picture Arts and Sciences told the site. “They were such a highlight, and we were happy to have them.”

Crisis averted. Now we can all get back to enjoying our delicious Girl Scout cookies, just like Leo here: 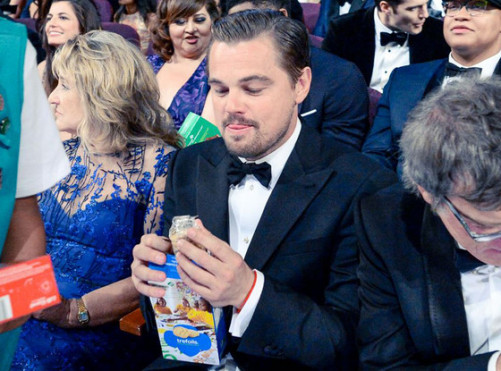