Charity Navigator earlier this year promised that an overhaul of its ratings system and an update to its advisory system were on the way. In May, the watchdog debuted the former. Now, it's delivered on the latter.

The new CN Advisory System, launched last week, replaces Charity Navigator's Donor Advisory and Watch List, two separate but similar lists whose functions led to some confusion for the public and consternation for nonprofits. Michael Thatcher, CEO of Charity Navigator, said in February that the Watch List was "more toxic," but that the Donor Advisory was actually the more damaging claim. The Watch List, while less severe, could and often did have major negative repercussions for charities that ended up on it, especially if the media picked up on a charity's addition to the list.

The update simplifies and streamlines the system. Charities involved in alleged wrongdoing are now organized into three levels of concern—low, moderate and high. If an organization ends up on the list, Charity Navigator publishes on its profile an explanation for the advisory and a graphic displaying the severity level, as seen below: 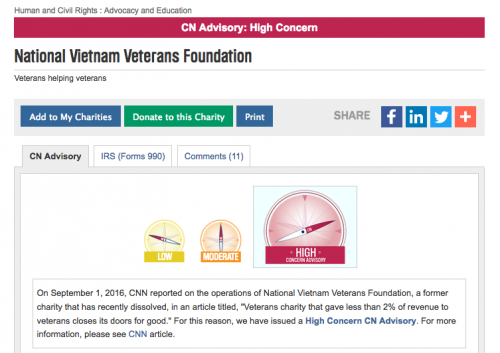 "Charity Navigator exists to help channel more resources to the charities that prove worthy of the public’s trust and support," Thatcher said in a press release. “Our newly launched CN Advisory System employs an objective and rigorous methodology to bring a new level of scrutiny to the nonprofit sector. Moreover, the new system renders the information in a way that is easily understandable."

The watchdog also announced that it hired Shannon McCracken, former vice president of donor development at Special Olympics International and chair of the DMANF Advisory Council, as chief development officer. McCracken, in the past, has been one of Charity Navigator's biggest critics. She moderated Thatcher's Q&A session at the DMANF luncheon in February—the one where Thatcher told charities they'd have to "agree to disagree" on donor opt-in—and spoke with us for our long feature on the charity watchdogs.

"Charity Navigator has a rather small staff and it wants to significantly expand the number of organizations it is rating," McCracken told us for that feature. "There isn’t enough horsepower there. It seems like there will have to be reliance on the nonprofits to self-report their own impact—at which point Charity Navigator’s role becomes less clear. Are they grading our report or grading our impact? Are they attempting in any way to validate the accuracy of our information, and should that even be their role?”

It's unclear why McCracken changed her mind, but her hiring, along with Charity Navigator's updates to its ratings system and advisory system, appears to be an olive branch of sorts from the watchdog to the sector—or at least an effort toward mending a historically contentious relationship.

The ratings system overhaul addressed some (but not all) of the sector's issues with the site's evaluation metrics, particularly its treatment of overhead, while the new advisory system aims to more clearly identify and separate high-concern charities from those with lower concern levels. And in McCracken, Charity Navigator now has on its staff a nonprofit veteran with extensive experience in the sector.

"Her deep history with a large, national donor program is a unique addition to the Charity Navigator staff," Thatcher said of McCracken over email. "In addition to her role building the organization’s development strategy and revenue resources, Shannon will help shape and bridge ongoing outreach to the community of nonprofits evaluated by Charity Navigator and beyond."