The threats to America’s family farms motivate action in this direct mail campaign.

The American Farmland Trust was founded in 1980 by family farmers and ranchers to deal with the loss of farmland to development. Since then, it has worked to preserve millions of acres as well as promote sustainable farming practices.

The front of this direct mail campaign’s No. 10 envelope does not include a logo or name in the corner car or anywhere else. Instead, an extra window lets a warning show through. “URGENT: Stop runaway family farm loss in [state name].”

The only other copy on the face strikes a different tone. It promotes the decal and book “reserved” for the donor.

The two-page letter inside uses motsly short paragraphs of two or three sentences to make a case for membership. It begins by getting the reader to think about the food they eat, and where it comes from. “[C]hances are it came from a local family farm.”

The rest of the letter details how rich farmland has been chopped up and paved over. “Poorly planned” development, it says, has put everyone in danger. And, worse, big cuts to state funding for preservation have occurred.

An insert in this direct mail package details AFT’s  efforts in advocating for land conservation around the country. On both sides, photos draw a contrast between parcels that have been “SAVED” versus those “LOST” to subdivisions. 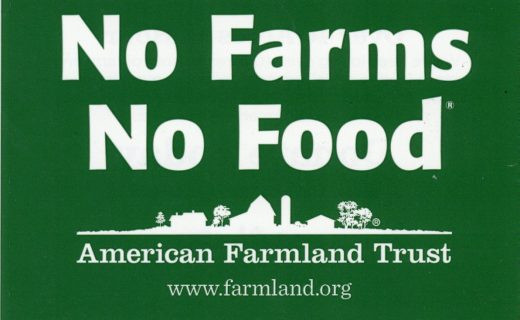 To help the group spread its message, the mail campaign includes a large three to three-four by six inch  sticker. It carries a succinct, but powerful message: “No Farms No Food.” And, it includes the AFT’s website for the curious.

And the almanac teased on the envelope? For joining, the new member gets a copy of the Old Farmer’s Almanac. It’s the oldest continuously published periodical in North America, and another connection made to tradition.

The Takeaway
There’s nothing like a big old-fashioned sticker to remind people of your nonprofit’s mission.