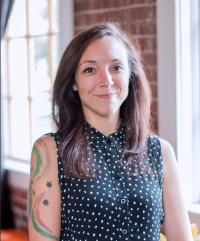 When I started at nonprofits, giving online was seldom utilized. So much so, that we would manually enter the donations into our CRM one-by-one from a printout. That was in 2004, when data syncs from online platforms to your legacy database were not a thing. People were skeptical about banking online and making purchases through a website. In fact, texting was still relatively new (holler if you had a flip-phone!), Facebook was in its infancy, and we were three years away from Twitter being ubiquitous in our lives. iPods had just starting popping up.

It was a simpler time in a lot of ways, but in the last 14 years our lives and the technology in them have evolved at a rapid pace. And despite any early concerns we had about online commerce, we have adapted. Now, we don’t give a second thought to paying for something with one click and having credit cards stored on Amazon or other services. Those same risks still exist on some level, but by and large, our lives are made easier because of the Internet. Information is more accessible, and we’re no longer resistant to the convenience that comes with it.

Several years ago, circa 2008, giving by text was introduced as a new method for frictionless giving. It, too, was met with hesitancy by consumers who didn’t want their precious direct line out in the world, making them accessible at all hours. Text to give also had some hiccups on the nonprofit side—the promise of immediate funds was met with the fine print of waiting until someone paid their phone bill and was still feeling generous enough to include the donation. The transfer of donor data wasn’t perfect either. But over time they’ve worked out those issues, and it remains a method for organizations to rally support.

Natania LeClerc has been doing digital marketing for large- and small-scale social good organizations since 2004, expanding their reach through strategies that help grow their list as well as keep users engaged.

Natania earned a BA in political science from Loyola University Chicago and a Certificate in Digital Marketing from DePaul University, Chicago. She joined ThinkShout in February 2016 as the senior digital engagement strategist. She not only leads engagement and marketing work, but also manages content audits, user interviews, user journeys and various other strategy work. Outside of making an organization’s goals a reality, Natania is passionate about photography, travel and her 55-lb lap dog.

Why Your Board Needs a Technology Committee