Will the Nonprofit Sector's Growth Help or Hurt Your Organization? 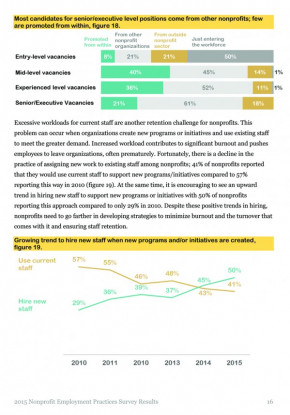 A nonprofit’s success is determined by its mission, donors and staff—the people who are there day in, day out, keeping the passion thriving and funds streaming in.

Nonprofit HR, a human resources firm focused on the nonprofit sector, surveyed 362 nonprofits on staffing, recruitment and retention practices for the “2015 Nonprofit Employment Practices Survey.” With 49 percent of nonprofits reporting an increase in staff size in 2014 and 50 percent expecting to create new positions in 2015, the survey projected nonprofit growth in 2015 that could outpace the corporate sector.

However, this growth could aggravate some already pressing issues. A few of the biggest recruiting concerns include:

The biggest takeaways, however, dealt with retention. Once nonprofits have great talent, they want to keep it, but major obstacles can interfere with that goal, including the inability to pay competitively, inability to promote, excessive workloads and insufficient staff resources.

To combat these factors, Nonprofit HR suggested implementing formal leadership development and succession planning to prepare internal talent for transition to higher-level positions, providing career-enriching experiences to engage entry- and mid-level staff, and continuing the growing trend of hiring new staff to run new programs (rather than increasing the workload of existing staff and upping the risk of burnout).