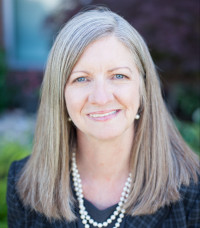 “Teri stepped into the interim president and CEO role during a challenging time. She led the organization through the sudden loss of past president and CEO John Lauck, obstacles of a global COVID-19 pandemic, an economic downturn and movements for social change,” said Nana Mensah, chair of CMN Hospitals’ Board of Trustees. “Under Teri’s leadership and stewardship, through these challenges, our organization remained strong and proved its capability by sustaining significant fundraising for children’s hospitals.”

As interim president and CEO, Nestel established a COVID-19 Impact Fund to meet the urgent needs of children’s hospitals during the pandemic and appointed the organization’s first SVP of diversity, equity and inclusion, ensuring its commitment to these values. She also introduced the charity’s new vision: Change Kids’ Health, Change the Future.

“I am honored and proud to continue leading an organization in which I so strongly believe,” said Nestel, of Salt Lake City, Utah. “Particularly in this past year, we have proven we can change and adapt to meet the ever-growing needs of our member hospitals. Unrestricted funding for children’s hospitals has never been more important than in today’s environment. I am most excited to partner with a distinguished Board of Trustees, as well as hospital, corporate and program partners across our network to fulfill our mission.”

To support the role Nestel is leaving, she has appointed Clark Sweat to COO Sweat, who had been serving as the organization’s chief experience officer, has more than 26 years of experience building partnerships to support children’s charities, including 21 years with CMN Hospitals. Under his leadership, fundraising revenue over the past decade has grown to more than $400 million annually.

As a leading children’s charity, CMN Hospitals raises funds for 170 children’s hospitals across the U.S. and Canada, funding research, critical treatments, medical equipment and charitable care to treat more than 10 million kids a year. Through award-winning fundraising programs and partnerships with more 125 corporate brands, the organization rallies communities to raise funds for local children’s hospitals. In 2019, more than $444 million in donations — unrestricted to support the greatest needs — helped children’s hospitals give kids the care they deserve. In turn, their families and communities are healthier.

Editor's Note: This press release was provided by a company unaffiliated with NonProfit PRO. The views expressed within do not directly reflect the thoughts or opinions of NonProfit PRO and its staff.

Sage Advice From a Seasoned Communicator

Why It's So Hard to Fundraise: Neoliberalism