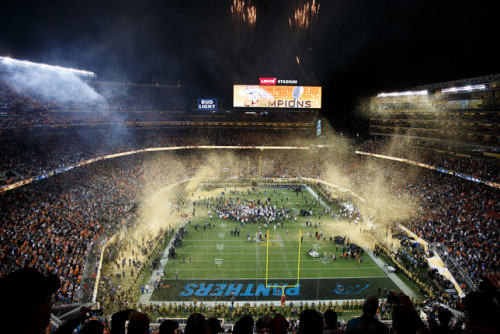 While the game was sloppy and the commercials underwhelming, there was something noteworthy to come out of it all. (And we don't mean Beyoncé's tour announcement.) This year’s host committee raised $12 million for local nonprofits, more than any other host committee has in years past.

For local nonprofits, there's good news. Every Super Bowl, the host committee—a group of well-known corporate figures charged with drumming up support for the big game and coordinates activities around it—raises money for local nonprofits, which the NFL matches. The rule is that the host committee must raise at least $1 million. San Francisco's—which includes Yahoo CEO Marissa Mayer, former Secretary of State Condoleezza Rice and chef Thomas Keller—managed to raise over $12 million, far more than any Super Bowl host has ever done in the past. A quarter of every dollar raised from corporate sponsors went into a philanthropic fund.

Where are the funds going? Through 50 Fund, Super Bowl 50’s philanthropic arm, the money will help Bay Area kids and young adults in low-income communities. The fund has given more than $7 million in grants to 140 organizations, according to Fast Company. While larger nonprofits received amounts as big as $500,000 to expand programming, each week—for 50 weeks leading up to the big game—local leaders of community-based groups also received $10,000 grants to continue their good works.

While many have criticized the negative impact the Super Bowl has had on San Francisco, the location of many pre-game festivities (45 minutes away from Levi's Stadium in Santa Clara, Calif.), $12 million is still a hefty sum for local nonprofits. Maybe this will help the city rationalize the $4.8 million bill it's on the hook for.

That said, $12 million can’t erase the NFL’s past questionable philanthropic efforts and fallout. But it's a start.