Hard to see, the Dark Side is—especially when you can’t use your lightsaber to light the way.

Newmindspace, a Toronto-based nonprofit, has rebranded its popular charity lightsaber battles as the “Cats in Space Tour” after it received a cease-and-desist letter from Lucasfilm’s lawyers for using trademarked terms, the Toronto Star reported.

In January, the nonprofit received the cease-and-desist letter after promoting the events as “lightsaber battles,” according to a blog on the event's website. It immediately stopped using trademarked "Star Wars"-related words, like “lightsaber,” “The Force,” “Jedi” and “Sith.”

The events have been held for the past eight years across the U.S. and Canada to bring communities together and raise funds for local chapters of the Make-A-Wish Foundation. A dollar from each reservation goes to the foundation.

The group received the letter after attempting to set the record for the largest global lightsaber battle, which involved 9,951 participants at battles in five different cities, in December.

As a result of Lucasfilm’s actions, Newmindspace started promoting the battles as “The Light Battle Tour” (where fans would battle with “light swords” instead)—until it received further word from the film company’s lawyers that those terms were too close to Lucasfilm’s trademarks.

Now, to avoid a lawsuit, Newmindspace has agreed to remove all trademark references to “Star Wars.” As the Toronto Star noted, Lucasfilm, which The Walt Disney Co. purchased in 2012, has 127 active trademarks registered with the Canadian Intellectual Property Office, so it makes having a “Star Wars”-themed event difficult.

But the organization insists that the “Star Wars” references are the only part of the events to change.

“This is still a fun gathering in the park where we fight with sword-like, illuminated fantasy weapons,” the blog reads. “We were simply required to rebrand as part of a legal settlement.” 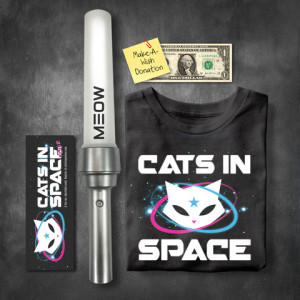 The upcoming tour dates—which include events in Salt Lake City on May 14; Grand Rapids, Mich., on May 20; and Boston on May 28—will be “space battles” fought with light-up “catblades” (plastic, collapsible swords that still look a lot like lightsabers). The events are free, and the catblades, which can be ordered in advance of the battles, cost $10, with $1 going to the event’s local chapter of the Make-A-Wish Foundation.

“We do feel like Lucasfilm may have overreached a little here, but we are still committed to bringing this fun, free, family-friendly event to Sacramento,” Kevin Bracken, co-founder of Newmindspace, told The Sacramento Bee, before the Cats in Space Tour came to town on May 4—Star Wars Day.

Remember: The Force is with you, always. No lightsaber required.

Are You Marketing Your Brand or Your Mission?