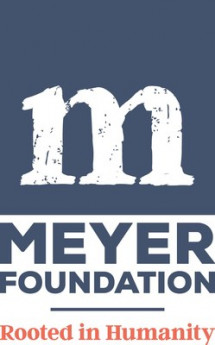 The Meyer Foundation, one of the Washington area's largest and oldest locally focused philanthropies, announced Stephanie Sneed as director of its recently launched Fund for Black-led Change, effective June 1, as well as the inaugural cohort of organizations awarded resources through the Fund. The Fund for Black-led Change, a $20 million commitment over five years of core support to organizations with Black leadership that center Black communities in the Greater Washington region, builds upon the Foundation's decision to center racial justice in its mission six years ago.

The Meyer Foundation has selected the following 13 partner organizations as the Fund's first cohort members: Advocates for Justice and Education; African Communities Together; Black Lives Matter DMV; Black Swan Academy; Bread for the City Organizing; Envisioning Safety on College Campuses (hosted by Black Swan Academy); Fair Budget Coalition; Future Foundation; Life After Release; Long Live GoGo; ONE DC; Racial Justice NOW!; UndocuBlack Network. Sneed will work with these organizations over the next five years to develop programming that builds their infrastructure and the power of their movements.

"Stephanie's experience as a fierce advocate for racial equity and long-time commitment to building power in Black communities make her the perfect fit for this role," says Aisha Alexander-Young, vice president for strategy and equity at the Meyer Foundation. "With Stephanie directing the Fund, our partner organizations will be well supported with her expertise in capacity building and coalition building."

"The Meyer Foundation's commitment to center Black communities and Black organizations in their equity work aligns with my beliefs and ultimately drew me to this role," says Stephanie Sneed. "I look forward to bringing to Meyer my racial equity analysis to support Black communities in the Greater Washington area."

Sneed comes to the Meyer Foundation from Fair Budget Coalition, an organization that advocates for budget and public policy initiatives that address poverty and human needs in the District of Columbia, where she served as co-director since 2017 and executive director since 2019. Prior to joining Fair Budget Coalition, Stephanie worked in youth development and with regional nonprofits as a staff member and volunteer.

One of three priorities outlined in the Foundation's reframed strategy, Advancing Equity and Justice Through Building Power, the Fund for Black-led Change includes the distribution of $15 million in multi-year, general operating grants to Black-led advocacy, organizing, and power-building organizations, beginning with the inaugural members of the cohort, with the intention of adding members throughout 2021 and 2022. The remaining $5 million in the Fund will be reserved to support infrastructure and capacity building, as well as other programming, based on the organizations' stated needs.

Looking forward, the Meyer Foundation will seek to expand the cohort of partners resourced through the Fund for Black-led Change, specifically in its funding areas in Maryland and Virginia. For more information on the Fund, visit www.meyerfoundation.org/the-fund-for-black-led-change-main.

Direct Mail or Email? Win Over Donors With Both

How to Get Your Next Corporate Partner