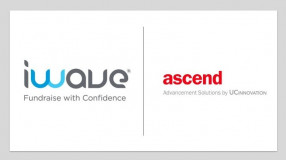 iWave, the industry's top-rated fundraising intelligence platform is thrilled to announce its newest integration with ascend by UC Innovation. ascend is an all encompassing Advancement solution for higher education institutions developed by UC Innovation. This connection enables educational institutions to experience a custom-tailored instance of Salesforce and powered by iWave. Equipped with this integration, fundraising professionals can engage more effectively with donors and focus on top gift prospects, seamlessly infuse donor intelligence directly into their database, and benefit from a simplified workflow.

iWave's fundraising intelligence platform comprises the most in-depth wealth and philanthropic database and insights that enables nonprofit, education, and healthcare organizations to uncover donors with the greatest capacity, giving affinity, and inclination to donate.

"We're thrilled to partner with ascend and expand the ecosystem connections we have with Salesforce," said Pranav Lulla, Head of Strategic Partnerships, iWave. "iWave's proprietary donor insights, including gift capacity and affinity scores, provide robust donor intelligence with wealth data right inside ascend. We both share a commitment to advancing the achievements of higher education institutions and our combination of intelligence and technology will enable clients to accelerate their fundraising efforts."

Higher education institutions now have the opportunity to enrich their internal ascend data with iWave's billions of wealth and philanthropic data points, so they can strategically prioritize the best donors to fuel their fundraising strategies.

This means users have access to iWave's powerful fundraising intelligence without leaving ascend, including important data points such as:

"ascend, built natively on Salesforce, is delighted to integrate with iWave and further the advancement and fundraising experience for our shared higher-education customers," said Caroline Chang, VP, Community & Product Engagement at ascend by UC Innovation. "This integration will enable our clients to use ascend's powerful and easy to use platform to build stronger relationships with their constituents, simplify and consolidate disparate systems, and use iWave's best-in-class scores and top-rated fundraising intelligence with ascend's easy-to-use and powerful advancement platform."