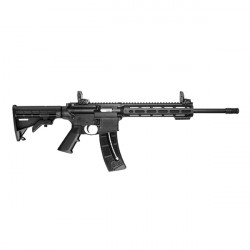 Dubbed “The Most Wanted Gun in America” by The New York Times, the AR-15, a semi-automatic rifle available to citizens, is filling out the title in surprising (and unsettling) ways.

• It often is sold out in gun shops.

• It has been used in several of the most devastating U.S. mass shootings, including the tragedies in Newtown, Aurora, San Bernardino and Umpqua Community College.

• And, apparently, it’s a popular choice for fundraiser giveaways. (No, really.)

But when Second Amendment Sports, a gun shop in McHenry, Ill., announced it would join the trend and raffle off a Smith & Wesson AR-15 modern sporting rifle to benefit the victims of the Orlando shooting, it hit a snag.

Initially, the proceeds from the $5 raffle tickets were to be donated to the OneOrlando Fund, which benefits the victims of the Orlando shooting—the deadliest mass shooting in the U.S.

But when the storeowners learned that state law only allows nonprofits to hold raffles, they had to cancel the fundraiser, the Chicago Tribune reported. In accordance with the Illinois Raffle Act, only nonprofits, or organizations that operate “without profit to their members,” can be issued the necessary raffle licenses.

While the gun used in the Orlando tragedy was not an AR-15, but a Sig Sauer MCX—another rifle with easy and accurate operation—the decision to hold this raffle was controversial from the get-go.

The raffle’s cancelation is welcome news to those who deemed it inappropriate, insensitive and offensive, including friends and family of the victims in Orlando.

“Guns are not toys,” Kathleen Larimer, the mother of John Larimer, one of the 12 people who lost their lives in the Aurora shooting, told the Chicago Tribune. “They should be taken seriously. I’m not saying they should be illegal, but raffling off a gun is not taking its killing power seriously.”

As New York Daily News explained, before the raffle was canceled, some individuals even called for Buddy Dyer, the mayor of Orlando who started the OneOrlando Fund, to reject Second Amendment Sports’ donation. This included Jason Mendes-McAllister, who lost his friend Edward Sotomayor Jr. in the Orlando shooting.

“I applaud them for wanting to do good,” Mendes-McAllister told the Chicago Tribune. “But what they’re utilizing to raise funds is insensitive to those trying to recover or who have lost people. You’re rubbing salt in other people’s wounds.”

Despite the impassioned responses against the fundraiser, the storeowners are still considering what they can do to get it back in operation. While for-profit organizations can’t hold raffles, they can partner with nonprofits and have raffles that way.

“We wanted to do something for the loss of lives and injuries that happened to people in Orlando,” Bert Irslinger Jr., co-owner of the store, told the Chicago Tribune. As such, Second Amendment Sports stands behind its original decision to hold the raffle and will continue to take donations benefiting the Orlando victims.