Going Beyond the Donation in Peer-to-Peer Fundraising

Habitat for Humanity International CEO shares how the nonprofit continues to build its high-spirited community of supporters across the globe.

As peer-to-peer fundraising continues to face a slow decline, nonprofits are scrambling to understand this decline and think of ways to help mitigate this problem. “Peer to Peer Fundraising Thirty,” a study that examines the top 30 fundraising campaigns in the U.S., showed that these top campaigns raised more than $1.39 billion in 2018, a 2.7% decline from the year prior. This decrease, according to the study, is 60% less than the year prior, which sheds a light at the end of the peer-to-peer fundraising tunnel. But it’s more than just donor cultivation; it’s donor stewardship, too.

So as nonprofits are huddling together to devise a master plan to flip peer-to-peer strategies on their heads, we’re here to tell you that the solution may not be as complicated as you may think. There are two major reasons that peer-to-peer fundraising is facing a decline: not enough supporter appreciation and engagement, and too many nonprofit options to choose from.

What does your supporter’s post-giving experience look like? Are you still engaging them? Are you continuing to follow up with them? Are you expressing how much they mean to you? If you’re not, or if you are sending them follow-up but it’s so generic and unpersonalized that they can see right through it, it’s a big possibility that they’ve lost interest and went to the next nonprofit with the same mission.

For this cover story, we wanted to gain insights from an established nonprofit on what other nonprofits can learn in order to successfully build out their next peer-to-peer fundraising campaign — and, ultimately, their overall fundraising strategy. NonProfit PRO editorial advisory board member, Paul D’Alessandro, connected us with Jonathan Reckford, CEO of Habitat for Humanity International, who gave us a peek into the renowned organization that provides safe, stable and affordable shelter to those who need it most.

However your nonprofit does peer-to-peer fundraising, it’s good to remember that peer-to-peer fundraising is mainly about the supporter experience, whether fundraiser or donor. Sure it’s about raising dollars, but it’s also about engaging and retaining supporters — you want them to have a good experience with your organization, so they continue their advocacy. If a volunteer decides to fundraise with your organization, it’s because they believe in it. They are offering their time and resources to help your organization raise more awareness and dollars for your mission, so ask yourself: How am I getting my supporter involved in the mission?

As an example, Global Village is a program from Habitat for Humanity that gives its volunteers opportunities to travel abroad to further the organization’s mission of building homes, all while meeting the people who they are helping with their charity. Through Global Village, volunteers get to experience the country like a local and meet with people with different backgrounds. It’s a cultural experience and learning opportunity for Habitat’s volunteers.

“The volunteers have an amazing experience. As we assessed the program, we [realized that we] didn’t do a great job of encouraging them to support the work on the ground,” Reckford said. “So we created our own peer-to-peer platform for volunteers to raise money for the countries where they were going to build at. We found that the teams that we trained and provided the platform to raised dramatically more money than the other teams.”

Giving your supporters the opportunity to get in front of the mission and be a part of the team that is helping to achieve that mission makes them feel connected with a sacred community — a community of people who have affinity for your organization and will go above and beyond just a donation. And that will give your organization more brand recognition and a reputation that says, “We appreciate you. You are important. We are incredibly lucky to have you. That’s why we want YOU to stand by us and make this mission happen.”

It also gives them an experience that they will never forget, and if it’s a positive experience, they will encourage their counterparts to be a part of it, too. There’s a certain level of genuinity and authenticity to that kind of word of mouth that money can’t buy. What we can learn is that, as nonprofits, you have to involve your supporters in your own way. You have to be creative in your peer-to-peer fundraising because it has the potential to go beyond a marathon, a gala or a Facebook fundraiser; it’s learning who your supporters are and what kind of activities would encourage them to take action.

The other side of the peer-to-peer experience is follow-up. It’s great when supporters donate or fundraise, but what happens when that ends? Does your supporter and your organization go separate ways, and you follow up with them when the next campaign rolls around? And then you’re wondering why they’re not jumping on the opportunity when asked? Or maybe you feel ghosted?

If you’re not maintaining constant communication with your supporters, you shouldn’t expect them to cont-
inue their support for your organization. Think of it as a friendship — would you help out a friend who only calls on you when they need something from you? I didn’t think so.

Habitat strives to continue to capture their supporters where they have momentum. After a volunteer has the Global Village experience, the organization follows up and also sends progress pictures.

“We want to show what has happened afterward because of the work of volunteers. If they worked on a project in a community that is ongoing, maybe we’ll send pictures once the family has actually moved into the home. And then we hope that they’ll continue to be supporters,” Reckford said. “We have wonderful examples of volunteers who then go back year after year. They recruit new volunteers to come with them, or we have some who go to a new country.”

For an organization that has about two million volunteers, ensuring that supporters are engaged can be a difficult feat, but it has been a priority for Habitat. Reckford highlights that the aspect that is distinctive about Habitat is the way it engages with volunteers in the mission.

“Our goal is: ‘Can we do a better job of engaging volunteers so that when they come out to the build site, they become full-fledged supporters of affordable housing, not just have a great one-time experience?’ It is very powerful that you can be in a relationship and tangibly participate with the cause, and I think that has made a huge difference,” Reckford said.

“For so many people, that experience on the build site is the way community is supposed to be. I think, in some ways, that’s part of what has kept people engaged with Habitat,” he continued.

The Relationship Between Supporter and Organization

I’ve said this so many times before: While peer-to-peer fundraising is a great source of additional revenue for nonprofits, nonprofits should think beyond just the donation. How can organizations go beyond the donation and captivate supporters, keeping them engaged and loyal to the organization year after year? People love and look for transparency.

Let’s face reality — nobody is perfect, and nobody expects you to be either (especially your supporters). They know you’re human, and they know you’re going to fail at some point. One of my favorite examples of a nonprofit’s transparency is charity: water. For its fourth birthday, the organization drilled a well in Moale, Central African Republic, where it was broadcasted live for the world to see. What’s even more important is that the people of Moale (during the time) had been waiting for clean water for over 16 years. It was intended to be a memorable day for both charity: water and the people of Moale.

Unfortunately, it didn’t go as planned. A number of problems occurred, and after 30 hours of drilling, the second borehole caved in. Devastating news, but CEO and founder Scott Harrison delivered this message: “We’re going to come up with another plan to drill here in Moale. We know there’s water here, but it’s just a matter of time, technology and determination. While we obviously hoped that today would go differently, we talk a lot about transparency at charity: water, and we’re committed to showing you the reality of what happens here.”

You can see the video at bit.ly/2miWGF7. And if you’re looking to see a happy ending to this story, charity: water was successful in getting the people of Moale clean water the
following year.

“We want to share what we’re learning — not only share the success stories, not only talking about what works really well, but also talking about the challenges that are out there. I think it starts with really building trust, and that means being transparent internally as well as externally,” Reckford said.

“We’ve always wanted to be good stewards. At the basic level, we publish an annual report that lays out all of our financial statistics, which is always available online in real time, along with past annual reports. Every Habitat entity has to be audited, and we certainly want financial transparency,” Reckford said. “We publish our 990 in documents for the public as well.”

Another layer of organizational transparency is sharing impact with supporters. In a world of 2.7 million nonprofits in the GuideStar database, supporters are looking for more than a “good” mission to support. They want to see numbers, and they want to hear the stories of people who are impacted by the
organization’s work.

An increasing number of nonprofits are sharing how donations impact someone’s life. One example is OneSight. On its website, it shares that 1.1 billion people in the world lack access to vision care. But with a $30 donation, you can give someone an eye exam, a pair of glasses and a brighter future.

Storytelling is an emotionally driven tool that nonprofits can use to better engage their supporters. Habitat finds that hearts are changed by stories, so the organization shares stories that are backed by data. 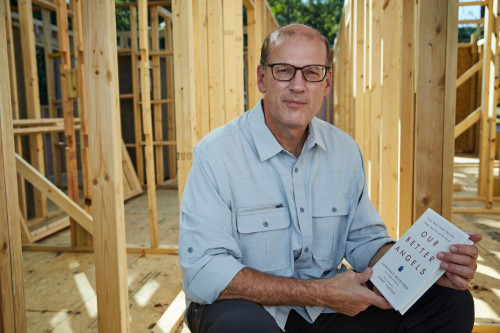 “What keeps drawing people to Habitat is coming across those local heroes who are making their world better, their community better. Habitat, in a way, is an example of the cumulative impact of individuals making choices to make their communities better all over the world and how that adds up,” Reckford said. This month, Reckford is releasing his new book, “Our Better Angels,” in which he shares stories of individuals he encounters who are making a difference — everyday heroes who are exhibiting “virtues” that can make our world better. The seven virtues that Reckford outlines throughout his book are: kindness, community, empowerment, joy, respect, generosity and service. The foreword of the book is written by 39th President of the U.S., Jimmy Carter, who is a big supporter of Habitat.

“[A great example is] a woman who was homeless herself and single mom. She wanted her kids to have a better perspective on life, so they started volunteering and helping others in their time. Through the process of volunteering, they experienced so many positive things,” Reckford explains. “And it never occurred to her that she might qualify to buy a Habitat house, and I had the privilege of helping build that house.”

All proceeds of the book will go toward helping support Habitat in its mission of affordable housing. To get your hands on a copy of the book, visit habitat.org/betterangels.

Editor's Note: This cover story was originally published in the 2019 September/October edition of NonProfit PRO.

The Rise of Virtual P2P Fundraising