Giving USA: Total Gifts Reaches $390B in 2016 (With Individual Giving Leading the Way)

On June 13, Giving USA released its “Annual Report on Philanthropy for the Year 2016,” one of the most respected yearly updates on philanthropic trends and statistics in the U.S., and invited NonProfit PRO to attend its presentation on the key findings in the report. The presentation was given by Patrick M. Rooney, associate dean of the Lilly Family School of Philanthropy at Indiana University, and Robert I. Evans, president of the Evans Consulting Group, and hosted by Andrew M. Grumet, partner at Drinker Biddle. 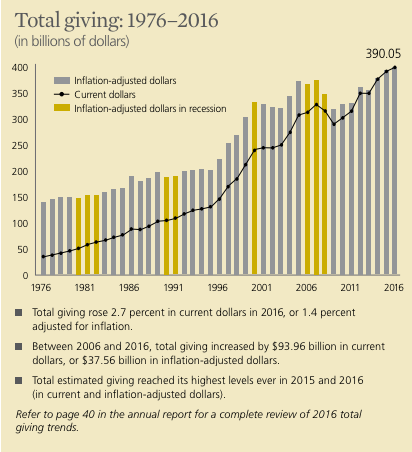 We spoke to Elizabeth Zeigler, president and CEO of Graham-Pelton Consulting, in a separate interview and asked her what aspects she thinks attributed to the general increase in total giving year after year. Here’s what she has to say:

“It starts with the generosity of spirit among Americans. But it’s not just about the donor; the fundraising profession continues to evolve. The innovative planning, design and implementation of campaigns makes an impact on giving. Nonprofit leaders and fundraisers inspire people to give.” — Zeigler

Although bequest giving has shown quite a significant decline, “bequest giving is fairly random in some ways. It’s really a function of how many people die each year, when they die, when their estate is processed and how philanthropic the top wealthiest people were,” Rooney noted.

“When you look at individuals (living and dead), individuals really account for 88 percent of all giving. Giving by individuals saw an increase of almost 4 percent from 2015 to 2016. This is somewhat remarkable, but I still think we have a long way to go.” — Evans

Here is the breakdown of charitable giving by recipient category: 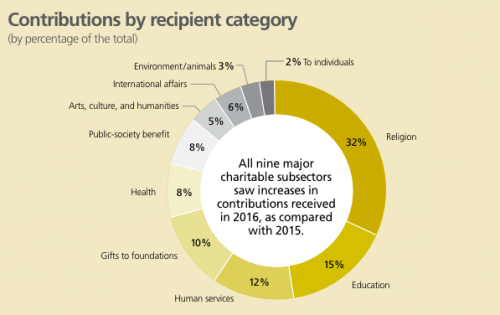 Giving to religion remains the top sub-sector. While this category of giving is not getting big dollars, it’s getting a lot of dollars.

“This is a part of my theme about the democratization of philanthropy this last year. This is further evidence that smaller and mid-sized gifts played an important role in the growth of philanthropy.” — Rooney

But, the education sub-sector should not be overlooked. Giving to education continues to see a steady growth. In fact, this is the seventh consecutive year that education has seen an increase. While this sub-sector has seen the most major gifts of $100 million or more, the religion sub-sector still receives the most gifts. Zeigler attributes the number of major gifts in the education category to the fact that universities, colleges and schools ask for bigger gifts and religious institutions don’t ask for gifts at that level at the same frequency.

“[Educational institutions] have alumni relations programs, and they invest heavily in engaging and cultivating their constituents on a long term, consistent and disciplined level. Religious institutions don’t resemble that model and tend to have more episodic fundraising campaigns.” — Zeigler

For the remainder of the year, Zeigler predicts that the sector will continue to see increases in individual giving and among the different subsectors due to the political climate.

“We may see increases in some subsectors based on Trump’s budget cuts, and policy uncertainty has potential to influence charitable giving. Now is the time for nonprofits to evaluate the situation and identify current funding sources, strengths and potential vulnerabilities.” — Zeigler

Know When the Development Office Has It Wrong