Total online and offline giving is estimated at nearly $2 billion.

As we all welcome 2020 with open arms, nonprofits are in the most exciting — and pressing — time of the year: year-end fundraising! Each year, the year-end kickoff always begins after Thanksgiving with Giving Tuesday.

Last year, Giving Tuesday donations amounted to over $400 million, and we wondered how on earth will we top that? We wondered whether or not giving will plateau — or worse, decrease. We also wondered if changes in federal tax laws would impact giving. (We’ve been wondering about this for a while now.)

But the truth is… people want to support social good, and they want to be a part of that movement. This year, total donations on Giving Tuesday amounted to $511 million dollars. In the graph below, sent to us courtesy of GivingTuesday, you can see our sector’s progression since the inception of Giving Tuesday in 2012. And boy, is it a big one! 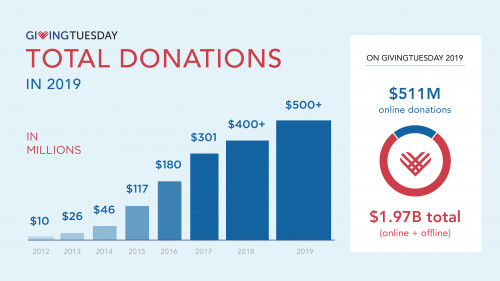 In fact, total giving, online and offline, is estimated at $1.97 billion! On social media alone, there are over 20 billion impressions in more than 220 countries. 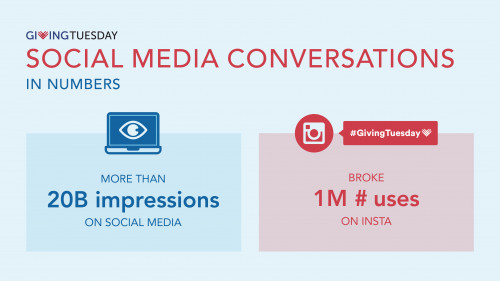 “Generosity is a core trait and value that brings people of all races, faiths and political views together. GivingTuesday creates a shared space where we can see the radical implications of a more generous world. We continue to be amazed by the amount of tangible and intangible measures of generosity expressed in every corner of the world. Our ultimate goal is to inspire generosity not just on one day a year, but to transform the way we think about and act on giving year long. This year’s new estimate of both online and offline giving is one more step we’re taking toward reflecting the scale and power of GivingTuesday as a movement.” — Asha Curran, co-founder and CEO of GivingTuesday

The three top Giving Tuesday campaigns on Classy were from Camp Kesem, The Salvation Army and Shriners Hospitals for Children.

PayPal reported in a press release that over one million of its customers across 184 markets donated more than $106 million to charitable causes this past Giving Tuesday. To take it one step further, PayPal is encouraging its customers to celebrate Giving Tuesday every Tuesday in December.