Donations From Trump’s Foundation: Where Did It Go?

The Donald J. Trump Foundation donated roughly $10.9 million to more than 400 charities between 2001 and 2014, according to a Forbes analysis on the foundation’s IRS documents. 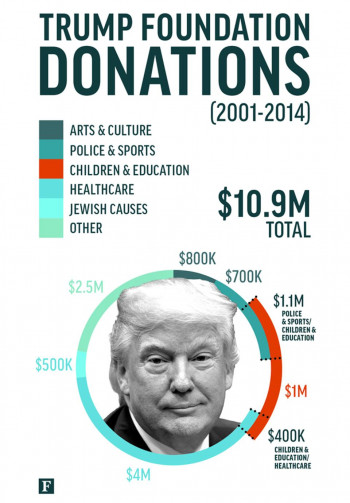 The charity that received that largest donation amount over the 14-year time span was the Police Athletic League, a New York City charity working with local police officers to provide summer camps, universal pre-K programs and after-school activities for children, according to Forbes. The organization received roughly $832,500 over the course of 14 years (8 percent of the foundation’s total gifts).

For health care-related causes, the foundation donated to about 100 organizations (36 percent of the foundation’s total gifts), including approximately $465,000 to the Dana-Farber Cancer Institute and Operation Smile, $326,000 to New York Presbyterian Hospital and $250,750 to the Hospital for Special Surgery.

Two noteworthy charities that Trump’s foundation has donated to are the William J. Clinton Foundation—a state branch of the American Civil Liberties Union—and a nonprofit run by the New York Times, which Trump has often criticized on social media.

Trump donated approximately $2.8 million (0.8 percent of his fortune) to his foundation between 2001 and 2008 and $0 between 2009 and 2014. Forbes wrote that Trump remained the president of the foundation, but “financed its activities with money from outsiders, including Comedy Central and NBCUniversal.”