The Declaration of ‘I Am a Fundraiser’: How Will You Professionalize Fundraising for Future Generations? 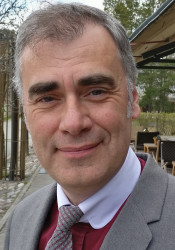 There’s an ongoing debate about whether or not fundraising is considered a profession. Majority of fundraisers (if not all) will argue that it is, and then there are some naysayers who will say that it’s not.

It’s an interesting topic of discussion, and it’s not one to be overlooked. I came across a green paper from Ian MacQuillin, director f Rogare, University of Plymouth Hartsook Centre for Sustainable Philanthropy’s fundraising think tank, titled “Less Than My Jobs Worth: Is Fundraising a Profession, and Does It Matter If It Isn’t?” In the paper, MacQuillin argues that fundraising is not a profession when evaluating it against previously published criteria.

The sociological approach, keyed by Ernest Greenwood in 1957, includes the following qualifying criteria: 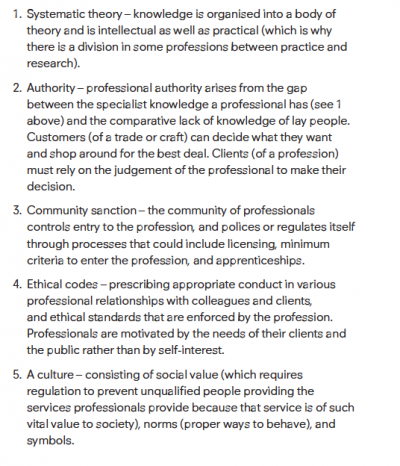 In 2005, Graham Cheetham and Geoff Chivers developed criteria and deemed it the “characteristics approach,” which defines a profession as the following: 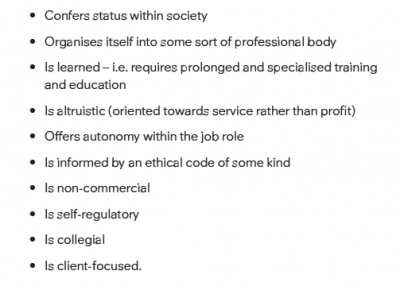 Within these definitions, fundraising falls into the “emerging professions” category (at best), along with journalism, marketing, advertising, public relations and librarianship. In 2010, Michael Davis developed a list of sociological reasons why journalism is not a profession, which MacQuillin adapted for fundraising. These reasons are: 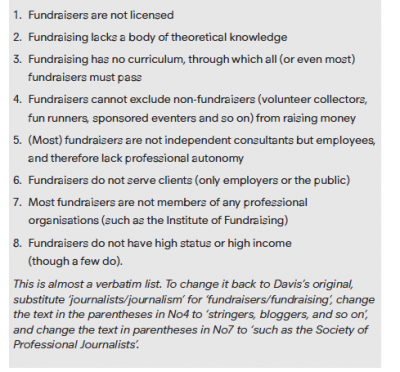 Another part of the argument is fundraising has no obvious academic home. The concept is variously housed at different colleges and universities or within the facilities of marketing, public relations or nonprofit management, MacQuillin noted. This coincides with the part about “anyone can become a fundraiser”—academics are not a requirement. In fact, higher fundraising education at a university level is rare. And if a fundraiser wants to receive formal continuing education, they have one way, which is the Certified Fund Raising Executive (CRFE).

While these forms of education are available, they are not mandatory to become a fundraiser—55 percent of American fundraisers claimed to be self-taught.

According to MacQuillin, “becoming a full-time professional fundraiser is not dependent on formally demonstrating how much that candidate knows about fundraising.”

Furthermore, there has been little theory development in fundraising ethics. When serious ethical problems arise, “fundraisers have to literally make up their applied ethics as they go along, running a huge risk that they will not get this as right as they could have done, because they are not able to draw on an existing cannon of ethical thinking and theory development.”

In light of all these published "criteria" on professions, MacQuillin believes that in order for fundraisers to professionalize, they need to follow a sociological approach to some degree. He notes that this is an “ongoing project that will require continuous work,” but in the meantime, fundraisers need to reclaim their professional autonomy. By doing so, they will give the fundraisers of future generations the tools they need.

How will you start?

You will start by declaring, “I am a fundraiser,” and you will lead with a sociological mindset, which will pave the way for your successors.