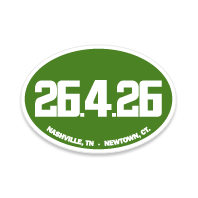 Now, Bruce has agreed to plead guilty, having reached a plea deal with the U.S. attorney’s office, The Associated Press reported. He is scheduled to appear at a change of plea hearing in Hartford, Conn., on May 12.

Bruce’s Nashville, Tennessee-based foundation, 26.4.26, aimed to provide funding for the victims’ families and memorials for teacher heroes, and to increase safety in schools nationwide, through marathons. Participants raised funds for each mile they ran, and each mile was dedicated to one of the 26 victims of the massacre.

According to The Newtown Bee, the foundation held marathons in Tennessee and New Hampshire, which Bruce promoted on social media and solicited donations for through a PayPal account. The foundation also received considerable attention for its efforts, including an article in Runner’s World.

While the foundation did present a $30,000 check to the Newtown Youth Academy Sports & Fitness Center, Ryan Graney, a co-founder of the charity, notified authorities in January 2014 when Bruce could not account for the remaining $73,000 of the $103,000 raised.

Graney had discovered suspicious charges to the PayPal account—including $1,200 for paddleboards, CBS New York reported. When she later went on Bruce’s Instagram page, she saw a picture of a new paddleboard in the back of his truck.

According to AP, when Graney confronted Bruce, he agreed to meet with her to discuss the finances in question, but never showed and cut contact with her.

“I am ready for the closure that this plea deal will provide, and I hope this will teach others a hard lesson about charity, philanthropy and doing the right thing,” she told AP.