Should You Use a ‘Tchotchke’ for Monthly Giving?

This is an interesting question. The first answer is that this depends very much on what you’re currently using in your appeals and messaging. The second answer is that you will never know until you test it.

If your donors are used to receiving something “in exchange for a donation,” using a tchotchke or premium as a “thank you” for joining a monthly giving program may be the way to go.

For example, if you’re sending out upfront premiums (also known as freemiums) now—think address labels, calendars, pens, note cards, or sometimes as big as flags or tote bags—you’ve probably somewhat trained your donors to expect something in return.

It’s also what public TV and radio stations do when they use a premium to entice members to join, either with the membership in full or by making a monthly gift. 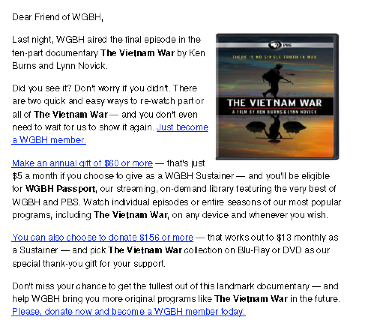 If you’re used to sending mission-focused appeals, your donors are more likely to support your organization simply because of the story you tell them and how they can make help—they want to do just that.

They’ll join your monthly donor program, because it’s easier and convenient on their budget. They’ve already made up their mind that they want to support you, and you’re allowing them to make a difference with a smaller amount.

They’ll join not because you promise them something tangible.

As mentioned, if you can test it, that’s the way to go. I’ve seen it both ways, but typically for mission-focused organizations, a tchotchke seems to work less. You could argue that it’s the premium. The closer aligned to the organization the premium is, the better. Offering yet another cap or another tote bag may simply not be considered that valuable.

Based upon some recent donor surveys I’ve seen, the most important reason why a donor decides to give monthly is because it is indeed the most convenient and easy way they can do what they can that fits their budget.

And we, as fundraisers, have to continue to make donors feel like they can indeed make a difference with any amount. In some cases that will require using a tchotchke as a carrot to get them over the threshold, in other cases, the ease and convenience is enough of a motivator. The real decision to join always lies with the donor.

Tell Your Nonprofit Story Through Video