Concerns over safety, health and economic uncertainty weigh heavily on all of America as we continue to live through the longest government shutdown in history. In addition to those fears, as a fundraiser, I can’t help but worry about how this will affect nonprofit giving in both the short and long term.

Polls show that the government shutdown and a late-year slump in the stock market have eroded Americans’ optimism for the economy and support for President Trump’s economic policies. Not surprisingly, there is a loose correlation between consumer confidence and nonprofit donations, with donations trailing slightly behind.

While the economy is doing well by conventional measures (unemployment rate is near a five-decade low, wage growth is accelerating and overall economic growth in 2018 was on track to be the strongest since before the 2008 to 2009 recession), sustained drops in confidence often signal dampened consumer spending in the months ahead and can be the precursor to broader economic downturns.

If we see a recession, we can expect giving to drop further. 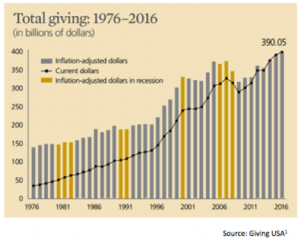 The last government shutdown was in October 2013, when Congress was embroiled in a debate over funding Obamacare. The 16-day shutdown cost an estimated $24 billion in economic output and left around 800,000 “non-essential” federal employees furloughed.

While the current 800,000 workers furloughed will receive backpay, it’s hard to tell if this extended shutdown and potential recession will cause Americans to cease their charitable giving behaviors completely rather than merely reducing the amount they donate. Of course, the shutdown is impacting lower income employees most significantly—especially those who live paycheck to paycheck—but this shutdown is also hitting a cross-section of our population that is not used to facing economic hardship and having to ask for and accept help.

Nonprofits traditionally see a falloff in donations at the beginning of the year after a robust year-end campaign season. Yet, due to the shutdown, more people are seeking help from human services organizations at this time. While charities within the D.C. beltway are feeling the biggest impact, the effects of this crisis are rocking the nation. The impact on federal prison workers, TSA and National Park rangers has been widely reported.

To add insult to injury, nonprofits that receive federal grants will not be receiving checks until the shutdown is over. Social service organizations (categories such as domestic violence, mental health and persons with disabilities) most likely rely on the federal government as their main source of funding. Human services orgs that are truly seeing an uptick for their services (food banks and short-term assistance groups) can use this national catastrophe as an opportunity to fundraise, as it is a real emergency. I would caution others of feigning an emergency where there isn’t one.

Here’s an example from a client of ours, The American Legion, who offers grants for Coast Guard active duty and veterans who go without pay due to a government shutdown. They are the only branch of service that is not getting paid at the moment yet is still fully operational and defending our country. 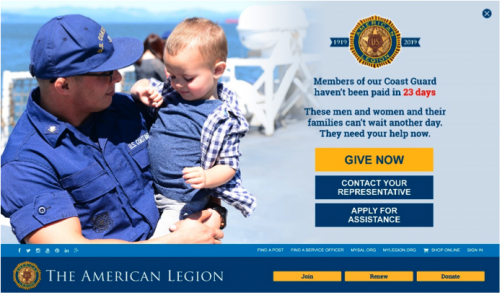 Disentangling what are temporary effects and what is the underlying trend is a difficult endeavor. Adding to the challenge for forecasters, the shutdown has stopped the release of a lot of government economic data for the time being.

During this time—because of all the uncertainty—donors of all income levels still feel anxious about the state of their finances, even when they truly can afford to give.

A very specific example of a downturn in giving is the Combined Federal Campaign. While donations have been on a downward trend since the OPM restructuring in 2016, over $100 million dollars was raised in 2017 from government workers. This year, the campaign abruptly halted for non-funded agencies when the shutdown began. The last two weeks of the year are when the majority of funds are given. Organizations are reporting declines in pledges as well employees canceling donations altogether.

If we learned anything from the last recession, it was that organizations should be careful about pulling back too much on their acquisition efforts. While there are short-term benefits to cutting expenses, the long-term effect on file health can take years to reverse. Instead, focus efforts on reactivation and mailing smarter through better targeting. And don’t neglect those major donors and planned giving prospects who will be less susceptible to economic swings. They’re used riding out market fluctuations.

With all of that being said, I must admit I live in the “Beltway bubble,” where the shutdown is headline news and top of mind every day. It is directly affecting my friends, family and neighbors. And while the shutdown may not have a direct impact on donations, the concerns over the economy surely will. In order for you to accurately measure impact, make sure you track your baselines and look at year-over-year results. It might also be interesting to look at response from donors within the D.C. metro area versus those outside of it. Pay attention to comment mail and phone calls as a general barometer. And, finally, take a deep breath—altruistic Americans will open their wallets again.

Angela Struebing is president of CDR Fundraising Group, a multichannel agency focused on helping nonprofits maximize their online, direct mail, telemarketing and DRTV fundraising results. As president, Angela is responsible for overall agency management and strategic planning for national nonprofit clients to include The Wounded Warrior Project, Shriners’ Hospitals for Children, MoMA and the Marine Toys for Tots Foundation. Angela is a frequent speaker at industry events and is recognized for her strategic expertise. She has also served as Education co-chair for the Bridge Conference.