For 63 years, I’ve been White, descended from Scots and Irish. An interesting part of my (Otis’) family lore was that my great, great grandmother was a Native American. After coming across some old family photos, I did research on my genealogy at Ancestry.com. To my surprise, I learned that my great, great grandmother was, in fact, Black. Frances “Fannie” Wade (1865 to 1899) was married to her second cousin, John Rudd. Both were descendants of my sixth-great grandfather, James Rudd, a slave owner in Maryland.

On various legal documents, John and Fannie’s race was listed as “White,” “Mulatto,” “Black” and even "Dark." I have since learned that the White/Mulatto/Black designation on census forms was an eyeball assessment made by the census-taker. Census-takers did not ask the person what their race of color was; it was based entirely on their judgment. Often, censuses categorized parents and children in the same household differently. My great grandmother, Carrie Rudd, is the girl on the far left In the photo. She apparently passed as White. 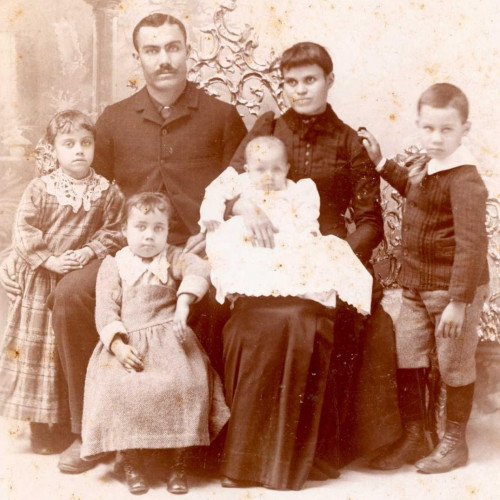 My discovery was particularly ironic, given that I grew up in a Black culture, attending a predominantly Black high school in the 1970s. I was a high school all-America basketball player on an (otherwise) all-Black team. In my senior year in Richmond, Virginia, I was the only White basketball player in the Capital District, my seven-high school conference.

While working a construction job the summer before my senior year, my skin became so tanned that I was darker than all but one of my teammates. He said to me, “Otis, you know you don’t have to look like us to play with us.” I told him that I got so dark because of my Native American ancestry. The topic of my mother’s master’s degree thesis was the Plains Indians. Her interest was piqued because of our supposed heritage. I still get those dream catcher premiums in the mail from nonprofits that serve Native American missions she donated to when she was alive.

So, race and skin color were near top of mind when I recently read research conducted by Dr. Abhishek Bhati, a political scientist at Bowling Green State University. In an article published in the academic journal "VOLUNTAS", he described how donors are less generous to missions that assist those in developing countries when the donations’ beneficiaries have darker skin.

Measuring the “implicit skin-tone bias” of 750 subjects, Dr. Bhati reported an inverse relationship between implicit bias against those with darker skin and giving. The greater the implicit bias, the less individuals were willing to donate.

In previous “Peeling the Onion” blogs on NonProfit PRO, we have written about the power of “in-groups” and “out-groups.” Simply put, people define themselves in terms of social groupings and are quick to diminish others who aren’t a part of them. Those who share some defining characteristic(s) are part of our in-group, and those who don’t are in our out-group.

Separating people into in-groups and out-groups relative to ourselves is baked into our DNA. It was a survival strategy that evolved over the thousands of generations our ancestors lived in the African Savannah. It’s a largely unconscious process. Dr. Bhati’s finding that it influences giving should come as no surprise. He concludes, “Relying on… images for charitable fundraising can prove counterproductive if they discourage giving to international charities at higher levels. Further research is needed to determine how nonprofits can accurately represent the people who will benefit from charitable giving.”

Research has demonstrated that people are willing to donate to others they see as “innocent victims” of their circumstances. Empathy is the driver of their willingness to give. But we also know that when we write copy at Turnkey, people are more likely to support others they see as being more like themselves. For many people, overcoming unconscious bias involves presenting missions in a way that supersedes superficial characteristics like skin color. For example, “She’s a mother just like you,” or “We are all God’s children.”

The thing that makes unconscious biases so pernicious, of course, is that they operate entirely out of our awareness. The best we can do is acknowledge they are there and consciously adjust their influence on us.

Hopefully, my own experiences growing up affected how I make in-group/out-group distinctions based on skin color. Black people are my in-group; my classmates, friends, roommates, teammates. I know that most White Americans never have the kind of exposure to a diverse group like I’ve had. Our society pays the price for that today.

A Black high school classmate who went on to get a law degree at NYU had an interesting reaction when I posted the story about Fannie and John on Facebook. He said, “This is an episode of extraordinary personal courage. I am in awe. I sincerely applaud you for doing this.”

His comment made me sad. It was spoken in the voice of the out-group; I never thought of him that way. My response was simple. “My brother.”

Budgeting for Equity: 3 Steps to Creating a Framework for Lasting Change