The Well helped a guy fit all his passions into one neat package of a job: coffee, building wells for people at water-risk and business.

Until six months ago, Mike Lenda had been happily installed for three years as the national director of mobilization at Compassion International. Prior to that, Mike had spent five years at Blood: Water. And before that, he spent eight years at Starbucks. The fact that he landed a job as a CEO selling coffee to help people build wells is freaky serendipitous. Or maybe it was fate. 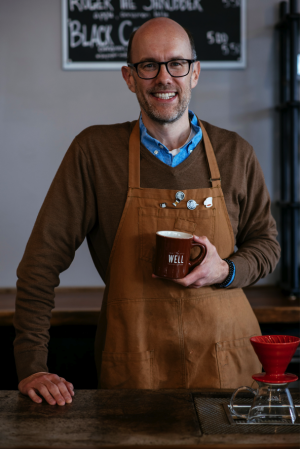 Lenda's first touch with The Well was at The Well's grand opening six years ago. Lenda both agreed to attend, but also recognized that The Well would need a well-digging partner. Voila—partnership accomplished.

Lenda says, "Life makes sense in reverse. Nothing is wasted in terms of my background, that's for sure. Every role prepared me for something. This job is a combination of all my loves. It is a crazy alignment of my background."

Last fall Lenda was invited to be CEO, going from a 65-year-old charity to a six-year-old startup. When he started, The Well did not have a benefits program, job descriptions or much of the infrastructure that would be needed. The effort had grown fast, and systems and processes were tough to install during that growth. Lenda's first effort was prioritizing people: getting a benefits package in place, designing job descriptions, etc. He said, "You just have to take care of the people or nothing works."

As Lenda looks to the future, he struggles with an idea that Turnkey folk study ad nauseam—how do you convert buying a thing (coffee) into a mission connection? He pondered, "How do you take that transaction and make it a transformation? And how do you measure the cost of creating an evangelist?"

"People will come in once for the cause, but the coffee has to be great," Lenda said. "We must figure out how and if consumers want to be communicated with about the mission. Do they want to know when and how they make an impact with their purchase?" Lenda and I spoke at length about the difference in the kinds of relationship connoted by a purchase versus a donation. See this blog for more on that.

Growth on the Horizon

The Well leadership also ponders the link between its mission and the growers of the coffee itself. "We are trying to more closely link coffee at its origin to the impact we are making. The world's greatest coffee is also grown in the countries with the biggest water problems. What are we doing to help globally and locally?" Part of what The Well does is select importers of coffee paying fair-market prices to growers.

With six current locations and a weekly call asking about bringing The Well to new locations and cities, Lenda sees growth on the horizon and strengthening the connection to mission.  As an example, On World Water Day, customers were particularly excited about buying coffee. That day, 100% of the sales went directly to build water projects in Uganda. Likewise, employees were excited about feeling part of the mission, even more than other days. Lenda is trying to build that connection every day for both employees and patrons.

The Well plans to be close to $2.5 million in revenue this year with only 3% received as direct donations. The majority of the revenue is received through customer purchases either online or at their retail store locations. Their future goal is to find engaging ways to invite customers into donation opportunities to directly impact the global water work they support in the countries from which they source our coffee.

Since opening, The Well has donated over $200,000 toward clean water projects through local partners in over 35 communities in 15 countries, providing access to safe water access for over 30,000 people. Lenda says, “I believe through more mobilization efforts, targeted campaigns and business efficiencies, I would like to double that impact in the next five years.” 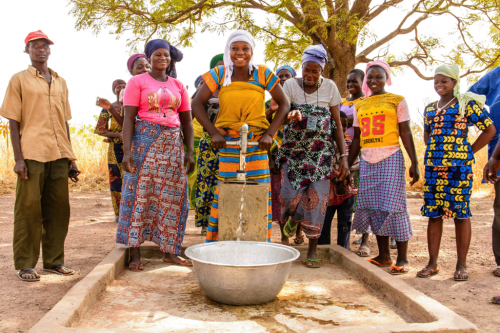 Prices are competitive with other good coffee purveyors, and in the future, Lenda sees a potential subscription model for coffee and the commensurate "good" that comes with it. Interest is strong from the public regarding the concept, as evidenced by the weekly calls Lenda gets regarding opening new locations. Growth, combined with efficiencies of scale, improvements in process and fundraising make the future smell like a good Cup of Joe for The Well Coffeehouse and Mike Lenda.