Earlier this year, I received a postcard mailing from the Share and Care Foundation, a nonprofit organization located in New Jersey. In just four panels (one of which was the address panel), the postcard tackled one of those funding needs that make many fundraisers cringe—toilets.

"The Toilet Crisis" was the headline on the first inside panel. The copy continued, "600 million people in India do not have access to indoor toilets," and then explained in two bullet points that this leads to the spread of diseases and safety issues for women.

I was intrigued. After all, conventional wisdom is that postcards, lacking a response means other than going online, are not the best fundraising tool. They also offer limited space to make a case for support. Yet they are relatively inexpensive and lack the barrier of the envelope that one needs to open before seeing the contents. So, was this enough to drive people to the website to give a $130 toilet to a family in India?

I spoke to Tejal Parekh, the senior operations manager at Share and Care Foundation, and asked her, "So, did it work?" The short answer is "yes." The foundation's goal for the mailer was to raise enough money to build 750 toilets in 2016; it already has completed more than 500 toilets as a result of donations it's received from the postcard and a follow-up email.

That’s worth a second look, so let’s unpack this postcard just a bit.

Measuring 8x6", the mailer folded to 4x6" and was double tabbed. The address panel had a live, presorted, standard-rate stamp. There was no teaser on that panel, but it did invite the recipient to sign up for updates; call or email with questions, comments or concerns; or "Please let us know if you receive duplicate mailings." In other words, this panel was hardworking, albeit functional. 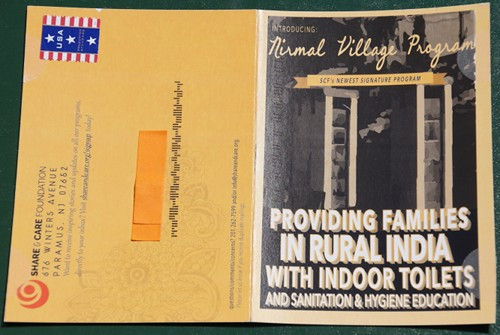 The exterior of Share and Care Foundation's postcard that aimed to raise money for toilets in India.

The front panel was pretty much a rule-breaker when it comes to direct response. It had artwork—a doorway that might represent the entrance to a house, but it’s not really clear because it is stylized. The headline was in all caps with a drop shadow and never mentioned "you," the donor. Added to that, it referred to one of the least sexy of all programs: indoor toilets, and sanitation and hygiene education.

But once you opened the postcard, the story unfolded, beginning with the headline noted earlier.

Parekh explained that the young person on the marketing team who put this together for Share and Care Foundation "told the story in a few simple lines. People don’t want to see too much misery, so photos were more positive images, and there was also a simple drawing of a family. It was short, yet it told a story." 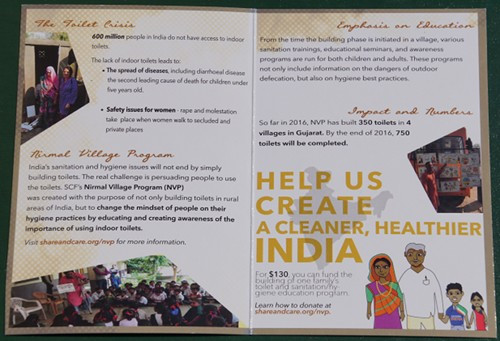 The interior of Share and Care Foundation's postcard that aimed to raise money for toilets in India.

I agree. The postcard caught my attention and apparently that of others on its U.S. database—donors and prospects. As mentioned, the response was excellent. Why? According to Parekh, the offer made sense, and the price point was reasonable.

The response mechanism was to drive people to a webpage that reiterated the offer (and added more information). When one clicked the "Donate Today" button at the bottom of the page, he or she went directly to a donation page that quickly summed up the offer and asked for $130 for a toilet. There were also lower amounts, but $130 was the focus. (One change I would make would be to add the "Donate Today" button to the top of the page, as well; right now, there is a "Donate Now" button as part of the header, but when you click that, it goes to a generic donation page. That could discourage someone who just wants to give a toilet.)

One of the surprises for the foundation was that a lot of lapsed donors responded. Again, it was a clear, compelling offer (reduce disease and improve women’s safety) at an affordable price point ($130). Plus, the only barrier to reading about the offer was two tabs. The copy was minimal, the story was easily understood, and the focus was on the beneficiaries, not the organization. Plus, it offered proof—the foundation already built 350 toilets in four villages and wanted to do more.

Yes, there are some things I would l want to change on this mailer (that’s an occupational hazard), but that’s not the point; the point is that Share and Care Foundation took a risk and sent out a lowly postcard that some would argue lacks what it takes to be a serious fundraiser—and made it work. It told a story briefly and in terms "Average Pat Donor" could understand. It made it relatively easy to respond by providing a simple URL and a specific landing page. It kept its costs low.

The foundation took a risk—and it paid off. So kudos to Share and Care Foundation. And for all the rest of us, maybe it’s time to rethink the postcard. It’s worth a test, but remember Parekh’s advice: The offer and the price point need to make sense, and the story has to be simple.

Pamela Barden is an independent fundraising consultant focused on direct response. You can read more of her fundraising columns here.