Where to Put Your Efforts in Major Gifts

You might have just read this headline and said to yourself: “I can tell this is going to be really boring stuff—I really don’t need to read or do this!” If this is your story, let me tell you a story.

I have had two situations in the last few months where the major-gifts officers (MGO) have refused to do the kind of planning and prioritizing I am suggesting here, instead, preferring to go with impulsive behavior to drive what they do with the donors on their caseloads on a given day. And it has been a disaster for both of them, forcing them into current situations where they have not done a good job and have run a very big risk of getting fired.

In one case, the MGO had carefully followed my advice here and had great success at cultivating two donors who each gave six-figure gifts in a previous financial year. This year, however, the MGO chose to just follow his impulses and the numbers have been pretty bad. When I asked him what he thought was the reason for the poor performance, he said: "Well, I didn’t prioritize my caseload like I did last year." I just shook my head.

The other MGO continues to take a position that all the donors on her caseload are the same. So she spends her time coming up with a communication plan for the caseload, rather than each donor on the caseload. The numbers are sliding and things are getting urgent. In this case, no matter what I say, I cannot convince her that she is headed down a disastrous path. I guess it will take a bad review and being put on probation to get her attention. It’s very sad and so unnecessary.

Why is it that something so logical that actually works as it relates to major-gifts planning is so difficult for some MGOs to own and operationalize? I really don’t know. It is a mystery to me.

And yet many MGOs still ask us this question. “I have 150 qualified donors and I just don’t know how to think about priorities and focus as it relates to the caseload.” And I’m glad we are asked it. Because there is a good and helpful answer. The chart below tells you what we think about this topic: 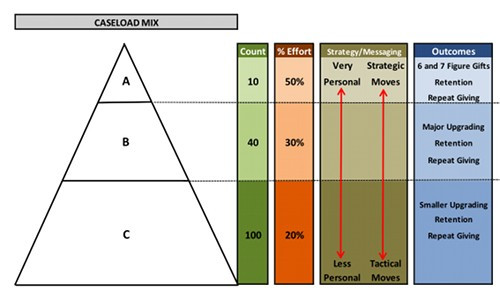 First, as we have mentioned many times in this blog, you have to tier your donors with the "A’s" being the highest-value donors in terms of current giving and capacity and going down from there. Do not put just high-capacity donors in this category. If they are not giving substantially now and have a high capacity, they should not be rated as an "A" donor.

Jeff and I think that you should have no more than 10 "A" donors in your caseload of 150. There could be a couple more, maybe five more, but don’t load this category up. Here’s why. You are going to spend 50 percent of your time on just these 10 donors! Yes, that’s right. Half of your time will be with these donors. Why? Because they have the highest potential. And your plans and moves with these donors will be very personal and strategic with a goal of retaining them, securing repeat gifts and securing large gifts.

From this point, you move down into your "B" and "C" donors who progressively will require less time, and whose strategy and messaging is more tactical and less personal.

What this approach does is stratify the caseload so you know where to spend your time.

I strongly urge you to spend the time looking at your caseload and making sure you have segmented it as suggested here. Once you have done this planning, it will tell you what you need to do and answer your question on how you should focus in your major-gifts work.

Don’t wait until you are in trouble to do this planning. Do it now!

Amplifying Philanthropy for 2023: 5 Strategies to Inspire Giving in a New Year

What Should Nonprofits Do About Anonymous and Controversial Donations?
Comments
Subscribe
Find Resources