Grant-makers appreciate the opportunity to have their mission and their successful grant-funded projects highlighted online and shared in a way that they can also share with their stakeholders. When reviewing the application, if social media is offered as a method of recognition of grants, savvy grant-makers will look at how active the social media networks are and also if or how they are currently recognizing funders or partners.

The successful recognition of a grant-maker’s support or of a grant-funded program can be done in such a way that it not only individually recognizes the grant maker’s support, but also engages a nonprofit’s stakeholders.

The work being done can be created in one space and then repurposed for other social media networks to ensure that all stakeholders are reached.

A small, yet mighty, nonprofit organization, Save The River, has a great example of how a small staff can accomplish this task. They always take photos of the field trips for the “In the Schools” program, but on one trip, they took one extra photo to add a “thank you” sign to a grant-maker being held by the students supported by the grant funding. They then created a great recognition and success story post for their blog to highlight the success of meeting a matching grant, as shown in the screen shot below.

Image via Save the River

The blog post was repurposed to be appropriate for Facebook as shown in the screen shot below. 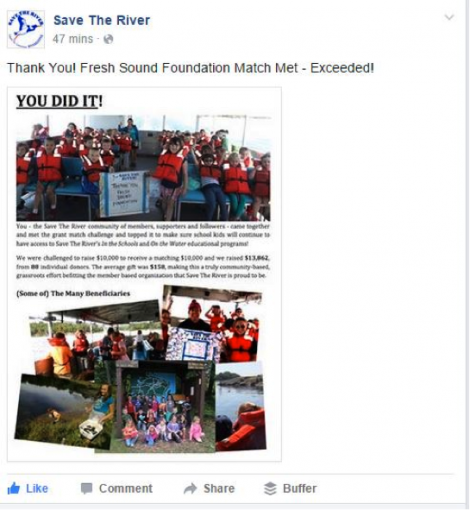 Image via Save the River

Finally, they tweeted about the success.

The repurposed content across their networks served as a way to thank the foundation that had supported their “In the Schools” program, thanked the individual donors who had supported the matching grant, and most importantly, followed through on the promise in the original application to recognize the funding on social media.
Was the funding foundation on all of the social networks they posted to? No, but their individual donors who supported the matching grant were. The widespread sharing of the campaign helped to spread their grant-funded success story to all of their stakeholders.

How can you use your social media networks to not only engage your individual stakeholders, but also to recognize and promote your grant-funded success stories?