How to Navigate #GivingTuesday Right

Sigh. It’s that time of the year once again, slicing through my seasonal cheer in this post-Trump America. The special day that warrants your attention right now? It’s known as Giving Tuesday.

In case you’re not in the know, or you’re still coming out of your Thanksgiving food coma and have totally forgotten the what, why and how, #GivingTuesday is a manufactured holiday founded in 2012 by the 92nd Street Y and United Nations Foundation. Their mutual goal was to fight commercialism and consumerism in the post-Thanksgiving season because, let’s face it, it doesn’t get much more capitalist than Black Friday and Cyber Monday. So what could be more noble than a national day of giving, combating greed with generosity?

In the same way that retail stores take part in Black Friday, we want the giving community to come together for #GivingTuesday. We ask that partners create and commit to a project for/on #GivingTuesday and then help spread the word to their networks. 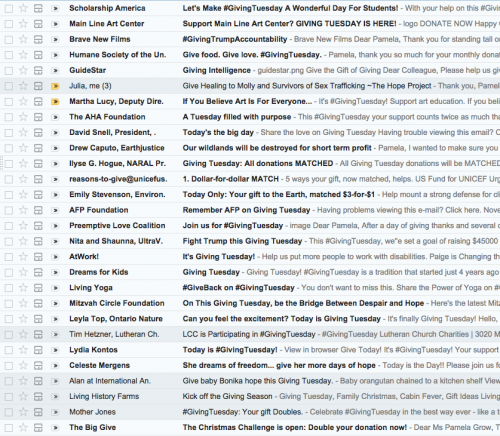 I’m ankle-deep in the mayhem, and who knows how far I’ll have sunk by the end of the day. If sifting through these emails wasn’t part of my job, I would have merely selected all and hit the delete button.

I digress. Back to the mayhem. I first wrote about #GivingTuesday back in 2013, one year after its initial launch. It’s three years later, and my stance has yet to be swayed. I am not saying #GivingTuesday is a negative mosquito that should buzz off and away for all time. Its results have been successful and there’s no reason to think that #GivingTuesday won’t continue its ace track record of fantastic fundraising.

But here’s what I am saying: If your nonprofit participates in #GivingTuesday, I implore you, don’t view it as a standalone strategy, because I’ve encountered plenty of organizations who put way, way too much stock in it.

How does one do #GivingTuesday right? By incorporating it into your overall big picture and using it as a tool to amplify your communications plan. Take a look at Heifer’s email for a prime example of using #GivingTuesday as a valuable tool, rather than becoming a #GivingTuesday fool. Ain’t nobody got time for the latter, and it’s often what happens when you’re a little fish in a massive pond.

Before even an inkling of #GivingTuesday crosses your mind, make sure everything is spotless and seamless as far as your donors are concerned. This means ensuring that your organization has the back-end systems in place to promptly acknowledge and thank new donors. Additionally, #GivingTuesday presents a wonderful opportunity to thank your current supporters. See what Mr. Holland’s Opus Foundation did here? In a word: brilliant!

Lastly, view #GivingTuesday through a donor-focused lens. Immerse yourself in the donor’s perspective, and never quit speaking to your people directly—like the individuals they are. Very often, we think in terms of virality, where the results are overwhelmingly massive and collective. The reality is, it all comes back to the individual donor and that relationship, from establishing to building and maintaining. If you can’t put a donor-focused spin on it, it’s probably not worth doing.