Monthly Donors Were Up on #GivingTuesday

#GivingTuesday results were way up compared to last year. Who said donors are not generous?

The best spot to see it all together is GivingTuesday Data Commons, fed by some 60 contributing partners and 40 global data labs. I know all are feverishly tallying results and creating infographics and more,  so definitely stay tuned for more results as they become available.

I of course am most interested in any trends on monthly giving, so I was pleased to see that Classy showed the number of monthly donors who gave on #GivingTuesday. 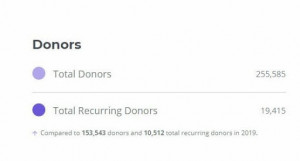 You see here that the number of monthly donors almost doubled compared to last year! Last year, monthly donors made up 6.4%. This year, it’s 7% of the total number of donors who gave that day, a small growth there, too.

From the hundreds of emails I received in my inbox, I only saw a handful of nonprofit emails that had two buttons or a second (monthly) ask in their email. If they did, those are the ones that did generate some new monthly gifts. Virtually all of the emails I received had a match in it.

One of the things most data providers did not track was the number of existing monthly donors who made an extra gift (nicely “motivated'' by that special GivingTuesday match).

Anecdotally, I heard monthly donors opened and clicked at twice the rate of other donors, but it will take a bit more tallying to see which percentage made that extra gift, because most did not have a special tracking link. But I hope to report on that in a future post.

Sadly, I heard about one big online form provider that went down for several hours, several times that day. Some of my clients that use them ended up sending some extra emails, and they doubled their number of gifts — so it was not a total bust, but scary nonetheless. But with these tremendous results, just think: If #GivingTuesday is an indication of what’s going to happen later on in December, all may be well in the world.

Consider adding that extra monthly giving button in a few of your emails this month, and you’ll be in a better position come January. And make sure someone is monitoring your online giving, especially those last few days in the year. So if you must create a quick extra email on the fly, you can do so! The final push is on!

How Can You Boost Year-End Giving? Part 2