It’s no surprise that Facebook has cemented its role in nonprofit marketers’ plans for raising awareness and building loyal brand ambassadors. As part of an integrated, multichannel strategy, social media is more than a publishing platform—it facilitates a meaningful, two-way conversation to connect with supporters, empower advocates and increase awareness for charitable causes.

More recently though, Facebook has proven itself to be a game-changing philanthropic catalyst, driving huge impact in charitable giving with the release of new fundraising tools on the platform, including Facebook Fundraisers.

Now is the time for nonprofits to take advantage of Facebook’s disruption in the marketplace to increase their impact and drive more brand awareness and revenue.

In November, Facebook announced that people had raised over $1 billion on Facebook for nonprofit and personal causes since 2015, helping to raise awareness and make an impact in their communities. These funds have been contributed through Facebook Fundraisers and donate buttons, with more than 20 million people who have either donated to or started a fundraiser on Facebook. Facebook reports that there are now over 1 million nonprofits in 19 countries that can receive donations directly through Facebook.

Facebook Fundraisers is proving to be a powerful peer-to-peer fundraising tool. Supporters raised more than $300 million in one year for the causes they care about using birthday fundraisers. During Giving Tuesday this past year alone, Facebook reported that people gave more than $125 million to nonprofits through the platform, up from $45 million in 2017. By waiving transaction fees and adding more fundraising tools like donation-matching and recurring monthly giving, Facebook is making it easier than ever for people to support causes that are important to them.

Investing in Fan Growth Is Paying Off

Organizations of all sizes are benefitting from Facebook fundraising tools, but nonprofits with larger fan bases have the potential to gain even more.

These nonprofits and other organizations have invested time and effort in raising brand awareness, developing an advocacy base with loyal brand ambassadors and amplifying their social presence by sharing one to five posts a day with content that drives strong engagement (as per Fanpage Karma).

Their dedication in building their Facebook audiences is paying off in a big way. But nonprofits must work harder to build relationships with their fundraisers and donors, because Facebook’s limited reporting makes it nearly impossible to match back donors to an organization’s database. Without knowing if donors have given recently on Facebook, nonprofits are unable to incorporate recent giving behavior into their solicitation strategies and, therefore, may risk marginalizing their best supporters. Equally challenging, nonprofits may not receive email addresses for Facebook Fundraisers or their donors, hampering their ability to cultivate relationships with their best supporters.

Despite the consumer backlash against Facebook due to user privacy violations, growing mistrust in content (e.g. fake news and fake accounts) and problems with the platform (e.g, changes to the newsfeed algorithm), there’s little evidence consumers are really moving away from the platform. In fact, according to M+R’s annual Benchmarks Study, the average nonprofit saw an increase of 13% in the number of Facebook fans.

That may change as Facebook looks to shift from a public forum to a more privacy-focused communications platform, as announced by chief executive Mark Zuckerburg in March. But for now, nonprofits on the platform are benefitting from building up their audiences.

With a global audience estimated at 2.3 billion monthly users, Facebook remains the most active channel used by organizations among all the social media networks. It is the place where most people still publish their lives online, seeking to feel connected, entertained and affirmed. As a result, nonprofit marketers looking to leverage Facebook’s dominance are putting more focus on increasing their digital advertising and supporter engagement on the platform.

However, with Facebook’s changing algorithms and growing competition, it is harder to stay at the top of supporters’ newsfeeds and capture the attention of potential new fans. Driving more engagement (e.g. liking, clicking, sharing, etc.) is one of the most significant factors influencing Facebook’s ranking algorithm for newsfeed posts.

A recent study by BuzzSumo looked at 777 million Facebook posts and found that the most engaging type of post was video. In fact, video posts get at least 59% more engagement than other post types, including questions, links, photos, giveaways and coupons. Although photos are widely accepted by marketers to be one of the most successful post types, video outperformed photos by 73%. 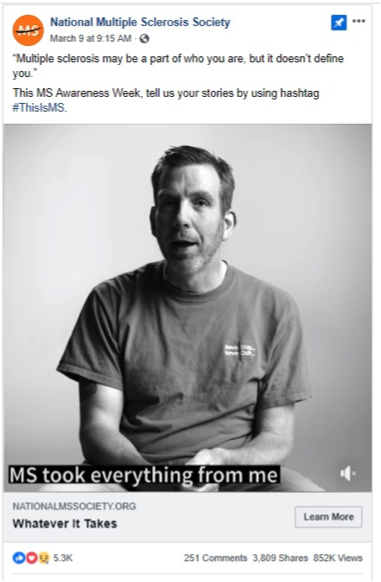 The National MS Society posts videos on its Facebook page featuring people telling their stories about living with MS to connect with and build their social supporter network.

It’s clear that video content should be part of the digital playbook to generate the greatest potential Facebook engagement and increase the number of fans and shared content for your brand. But it shouldn’t be the only tactic. Diversifying the type of posts and thinking about different ways to engage fans, like integrating a Messenger chatbot on a nonprofit’s Facebook page and encouraging comments to posts, can invite more interaction and valuable communication with supporters, boosting reach.

Finally, play the long game by focusing on building an engaged social media community. Enriching relationships with supporters and inspiring them to support the causes they care about is the cornerstone to long-term fundraising success.

Eve Smith is an experienced fundraiser with over 20 years of nonprofit direct response marketing expertise. Eve brings extensive knowledge and practice to Merkle’s nonprofit clients including integrated strategy, omni-channel fundraising and marketing, and program innovation. She specializes in both scaling up already-successful fundraising programs to raise more funds and crafting new programs that leverage peer-to-peer fundraising and social giving to bring in new revenue. At Merkle, her clients have included major national health charities, international relief and faith-based organizations, and animal welfare nonprofits, among others. Before joining Merkle, Eve was lead consultant to national cause-based nonprofits and worked with leading nonprofits and foundations to advance their online marketing and fundraising programs.

Amplification Marketing: What Is It? Why Employ It?
Comments
Subscribe
Find Resources