In P2P, It’s All About the Benjamins

Wall Street investors famously coined the phrase, “It’s all about the Benjamins,” referring to the hundred dollar bill that bears Benjamin Franklin’s likeness. As it turns out, Franklin can give us a few tips about how to maximize fundraising dollars.

Franklin was born one of 17 children to parents who were poor—a difficult station—but he achieved the status of scientist, scholar and politician later in life. To compensate for his humble origin, Franklin developed sophisticated social skills and became “a master of the game of personal politics,” to quote a biographer.

Early in his political career, he had a peer who attempted to smear him and tarnish his reputation. He shrewdly set out to turn his political opponent into an ally. To do so, he wrote a letter to the man, asking if he could borrow a specific book from his library. His rival complied with his request, and Franklin returned the book a week later with a “thank you” note.

The next time the legislature met, the man approached Franklin personally and greeted him warmly. According to Franklin’s autobiography, the man “ever after manifested a readiness to serve me on all occasions, so that we became great friends and our friendship continued to his death.”

Often heard conventional wisdom about our organizations’ volunteers is that they’ve done “enough” and shouldn’t be approached to fundraise, recruit others, donate, etc. Too many asks will run them off is the sentiment.

But if we accept the wisdom of one of the Founding Fathers, every time we ask for a “favor,” we position our supporters to develop even greater affinity to our cause. And yet, we are reluctant to embrace the power of the ask.

Data from the 2016 National Awareness, Attitudes and Usage Study tells the story. The study surveyed 98,000 donors who had previously given between $250 and $2,500 annually to cultural institutions (museums, symphonies, etc.), but then stopped donating. 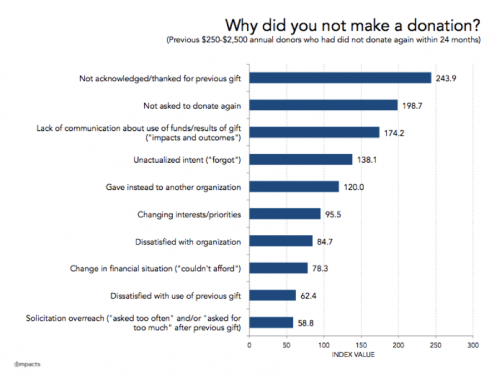 The two most common reasons for discontinuing donations were:

The last reason given was “asked too often.” People stopped giving because they weren’t asked to donate as often as those who were asked too often after a previous gift. These people wanted the nonprofit to ask for a favor/donation, and we were scared to do so.

What is Franklin’s lesson to us? Our requests to supporters isn’t a zero-sum game. It is actually the case that every act of support can increase their positive attitudes about our organizations, as long as we acknowledge them appropriately.

So, ask away—your supporters are waiting. Just remember to say thanks.

4 Ways to Get to Know Your Organization's Audience

15 Questions to Go Deeper with Your Donor

8 Questions to Ask to Get Inside Your Donor’s Head