Now that we've entered the new year, it's time to discuss new marketing strategies and replenishing your donor base. So, if you're a fundraiser leader, one of the places you might want to start looking at now is marketing to Generation Z (aka Gen Z or iGen).

Gen Z core values differ from those of previous generations — yes, even Millennials. However, there's a lot of opportunity with Gen Z to get them involved in your cause and engaging other fundraisers, such as peer-to-peer. 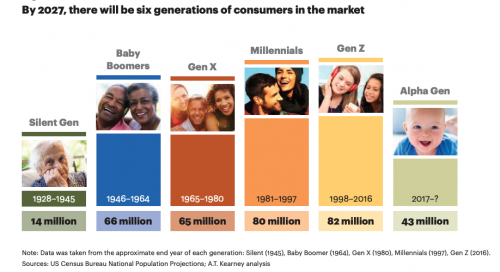 As a nonprofit leader, it’s in your best interest to understand this group so that you may better your marketing efforts to more effectively reach them.

Unlike earlier generations that matured into social good causes, Gen Z is socially focused. They are passionate, similar to Millennials, about social justice issues. Unlike Baby Boomers and even some in Generation X, Gen Z also cares very much about full equality.

Also, this generation cares about the environment and saving the planet! It will be bad news for fast fashion companies and traditional retailers, as Gen Z is heavily involved in ethical shopping and embracing second-hand apparel. Pro tip: Your nonprofit should consider is becoming a green nonprofit.

It’s All About the Community and the Collective Good

You wouldn't expect the first generation immersed in social networking not to be community-focused, would you? One of the best Gen Z core values is that they care about other groups and formal volunteering. They believe more about action than words, and since they're "always on," they are continually sharing experiences.

They care very much about the planet, but also its people. As a group that cares about the community (local and global), they also value authentic brands and nonprofits.

Freedom of Expression Is Essential to Gen Z

Gen Z cares about the collective good and well-being. But they also care about everyone having the chance to be who they are in their lives. In other words, freedom of expression is vital to Gen Z. They want to support people and groups that are real (i.e. authentic). But they also want to ensure that being genuine means the freedom to express as desired.

Education Is Not a Lost Cause

There seems to be a lot of debate about the changing landscape of education. However, education is an essential Gen Z core value. Now, that doesn't necessarily mean that it has to take place in a classroom. And, certainly, as technology changes, getting a formal education will continue to evolve. That said, Gen Z does care about learning and even obtaining a formal education.

Be True to Your Nonprofit Brand and Don’t Pretend

Similar to Millennials, one of the significant Gen Z core values is authenticity. As a nonprofit marketing or fundraising professional, you should check out this article. McKinsey & Company published it, commenting Gen Z cares about the "search for truth."

It's not just about being true to your nonprofit brand. As a result, it's also about letting everyone be themselves. That's the reason why Accidental Icon (a Baby Boomer) has a significant following with young people of Gen Z. It's about keeping it real.

Marketers have started to look at Gen Z to engage them now, and your nonprofit should, too. Getting them involved will get you tech-savvy supporters with a fierce drive to make a positive impact. Also, it will get you passionate young people who care about making a difference in the world.

Kristy Fontelera is a creative professional in corporate and nonprofit social media advertising and brand strategy. As the chief marketing officer at Funds2Orgs and Elsey Enterprises, she works with a suite of global fundraising brands and manages national campaigns for her clients. She hosts a monthly webinar with Funds2Orgs, teaching nonprofits how to make an impact with their social media strategy. Kristy is a passionate individual that loves nothing more than to help others make an impact in their market and the world.