This article talks about how nonprofits, like the Texas Civil Rights Project and Save the Children, are responding to the Trump administration’s “zero-tolerance policy” that has resulted in separating parents seeking asylum at the southern border from their children. Amid the outrage that led up to Trump’s decision to reverse course and sign an executive order stopping the forced separation of families, money poured into nonprofits that deal with immigrant rights issues.

In addition to the funds raised by nonprofits dedicated to immigrant rights, by now, you may have read about a Facebook fundraiser for an organization called the Refugee and Immigrant Center for Education and Legal Services (RAICES). RAICES is a Texas-based nonprofit that provides free legal services to immigrants. Started June 16 by a California husband and wife, Dave and Charlotte Wilner, the fundraiser was titled, “Reunite an Immigrant Parent With Their Child.”

The goal of the fundraiser was initially $1,500, enough to help an immigrant family post bond. At the time of this writing, more than 500,000 people have donated more than $20 million. In its first 10 days, the fundraiser averaged over $1,400 a minute. The goal has been increased from the original $1,500 to $25 million. Facebook reports that it is the most successful Facebook fundraiser in history. 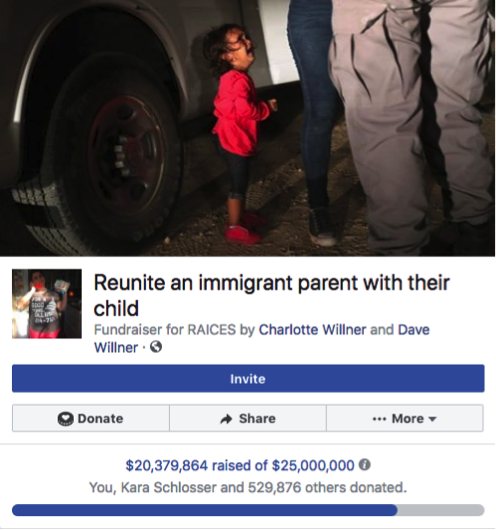 The annual budget for RAICES is around $6 million; their entire annual fundraising goal is less than $1 million. RAICES executives first learned of the fundraiser in an email from the Wilners that said that their fundraiser seemed to be “getting kind of large.” At that time, it had raised less than a million dollars. During the week they watched in astonishment as more than a million dollars a day came in through Facebook.

The lightning-in-a-bottle success of the campaign has been compared to the ALS Ice Bucket Challenge. Although both were fueled by a viral response by donors, the campaigns have little else in common, besides the torrent of donations, of course. The success of the IBC was due to associating a cause (ALS) to a novel behavior—dumping water on one’s head. Very few people are directly affected by ALS, so the temperature of their emotion towards the mission of the ALS Association was tepid.

The funds raised by the RAICES campaign, on the other hand, is the product of hot emotion. An article in GQ magazine last year described, “The Rise of the ‘Rage-Donation.’” Author Ashley Fetters says, “Someone I know told me recently that he's picked up a new habit since the election of Donald Trump: Every time he gets angry watching the news or reading his Facebook feed, he makes a donation to a nonprofit whose cause he believes in. He likes to choose donation recipients that help ‘offset’ whatever's pissing him off.”

Anecdotal evidence says that rage donation does provide a catharsis for political frustration. We know, because we donated to the Wilner’s fundraiser when it was at about $4 million, and yes, we did feel somewhat better! A bigger issue that rage donations bring into focus is the use of Facebook as the fundraising platform of choice.

Here’s the good—it’s cheap, as in it’s free. There is no transaction fee charged for running the donations through the platform. Susan G. Komen recently announced that they raised more than $1.7 million via Facebook for their Race for the Cure series.

Here’s the bad—although the money belongs to you, the data belongs to Facebook. When we talk to clients the first pain point they always bring up is acquisition. The names and contact information for the 500,000 plus donors, (including us) that contributed to the Wilner’s fundraiser were acquired, all right, not by RAICES but by Facebook. And Facebook will sell or license that information in the future to the highest bidder.

That’s the huge downside to encouraging your constituents to hold organic fundraisers on Facebook. It would be so much better to pay a transaction fee than to come away with no data, but of course, that’s not an option. Facebook knows how valuable the data is, so they make a big deal out of “giving it away for free.”

Your options? You can use a platform like Blackbaud’s TeamRaiser that has an integration with Facebook. Donors aren’t redirected to a TeamRaiser page to donate; instead, they remain in Facebook’s interface to complete the shorts steps required to make a donation. And you don’t have to worry about getting the information back into your CRM. Dollars raised from Facebook are automatically reflected within the TeamRaiser campaigns and reporting. But that doesn’t solve the acquisition problem.

Turnkey has engaged with a partner who has developed a clever way to interact with donors via Facebook Messenger. When contacted through Messenger via automated messaging, 20 percent of organic donors are responsive. Of this group, 80 percent opt-in and give up their emails.

While there’s an investment involved in implementing this kind of technology, we all know the value of acquisition. What you hope to do is break even in the short run in order to enjoy handsome dividends over time.