Donor Compliance: How My Experience Inspired a Fundraising Epiphany

The Beloved (Otis Fulton, my co-author on almost everything and our human behavior expert) and I are in Paris for my birthday. Paris is the city of Jason Bourne movie police sirens, tiny streets, impossibly cute children, thin people and few Americans (at least these days).

We don’t “tour” much, as our preference is to house ourselves in neighborhoods, eat at modest restaurants, meet locals, etc. But I knew that if I did not see the Eiffel Tower, I would be sent back to France post haste by several friends. So, out of our comfy neighborhood and into the tourist area we went.

Upon debarking the Batobus (river taxi) at the Eiffel Tower, we were almost immediately accosted most aggressively by two women who said they were fundraising for the mute and deaf. They had clipboards and vests for credibility. Our encounter:

Woman 1: “Madam, do you speak English?”
Me: “Yes.” (Otis was getting the same question at the same moment.)
Woman 1: “I am getting signatures for legislation to help deaf and mute children. Would you sign?" (Again, Otis was getting the same question.) "Please fill in where you are from.”
Me: “Sure!” (I start to add my name to a petition then I see the “donation amount” spot. I stop writing.)
Woman 2: “Look! Your wife said ‘yes.’ You will give us a donation?”
Me: “I did not say ‘yes’ to a donation!
Otis: “She already got a fiver.” (In the course of giving five dollars, he had pulled out his wallet and shown that he had more money. This is also called a “wealth screening.” Both women then turned to Otis and began to berate him about me for not donating. However, they did not know what a steel magnolia was.)
Me to Otis: “Start walking.”
Woman 2: “Sir." (She is literally hanging onto to his arm.) "We have children in need. Your wife said ‘yes.’”
Me: “Like hell I did. Walk.”
Otis: (In “The Fly” voice,) “Help me, please.”

When we escaped this rather intense exchange, we looked at each other and said in unison, “Never leave the neighborhood," and "Let’s eat.”

We found a delightful French café and over the entrée, we both realized, at almost the same time, that we had just witnessed everything we teach! We had been subject to, in one condensed 45-second interval, what we aspire to do over the course of a season of peer-to-peer fundraising.

These women had done almost everything right (except almost certainly keeping the fundraised money and the berating of the wife who was in earshot).

The job at hand for them was to extract cash immediately, purportedly to help deaf and mute children. Now I get it. Shysters really hurt legitimate face-to-face fundraisers. But put that aside for a moment to use their theft to help us hone our craft.

Here’s what they did: They got us to say “yes” repeatedly to small behaviors like signing the petition or telling them where we were from and that we spoke English. When it got to the donation, it was much harder to say “no.” They, in short, persuaded 50 percent of the audience to give their first donation using solid psychological techniques. Because he gave up five dollars, the Beloved was tasked with explaining.

There’s an interesting visual you can use to conceptualize persuasion: a playground slide. The idea comes from Roger Dooley who writes the blog “Neuromarketing.” His tag line: “Where neuroscience and marketing meet.” 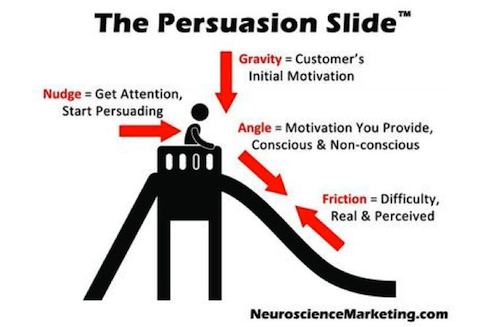 This is how he describes the process of persuasion:

1. You give someone a nudge. This might be in the form of a tweet, a blog post, a phone call, an ad or a personal request. (Example: “Do you speak English?” and “Will you tell us where you are from?”)
2. Gravity. The customer’s internal motivations help move him or her down the slide. (Example: We both love nonprofits and serving humanity.)
3. Additional motivation that you provide—the angle of the slide—can serve to enhance the gravity. If a person has low internal motivation, it will take a steeper angle to get him or her down the slide. (Example: “Look, your wife said yes!”)
4. Friction. Seen here as the difficulty (real and perceived) in converting (getting them to do what you want them to do) causes the slide to slow down to varying degrees. (Example: Wife now saying “no” and giving beady-eyed stare to “fundraisers.”)

Securing the Face-to-Face Visit With a Donor

The Transformation of a Donor Through Encouraged Aspirations

The Race You Want to Lose

When Can We Meet With Donors Again?
Comments
Subscribe
Find Resources