I hate to be sad or depressed. I know some people like a good cry; they feel it is cleansing, cathartic. I am not one of them. I’ve even been accused of wearing permanent rose-colored glasses because of the lengths to which I will go to avoid tearjerker movies or sob-inducing novels.

Given this tendency, it is no wonder that I avoid commercials for the nonprofit organization American Society for the Prevention of Cruelty to Animals (ASPCA) at all costs. I still hold a grudge against Sarah McLachlan for the visceral reaction I get any time I hear her song “Angel,” 11 years after the ASPCA ad using it first aired. Get this though: It turns out that even Sarah McLachlan can’t stomach the commercial in which she starred! She has to change the channel, too, because it makes her so sad. But that commercial, which came out in 2007, raised $30 million in the first two years it aired. The ad was sickening, but clearly effective.

Based on the amount raised from that one commercial, clearly the ASPCA knows what it is doing! But ASPCA and Sarah aside, my usual advice to nonprofits is to find a middle ground when telling mission stories. You may have a difficult mission; it may relate to violence, abject poverty, child neglect or something that is equally heart-wrenching. It is necessary to educate people about the issue, to show how the problem or circumstance hurts people or animals, or affects the community. Your readers may be greatly upset hearing about the situations your mission addresses, and that is okay. But you do not want them to stay sad.

When writing fundraising appeals, it is important to show how your organization is helping to deal with or fix the issue. Children may have been removed from their home because of abuse, neglect or abandonment (the sad part of the story), but, because of your supporters, the children have a safe place to live where they can be healthy and thrive (the happy resolution).

I call it an inverse story arc. In a standard story arc that writers use in novels, tension builds, comes to a peak, then slides down the slope to resolution. 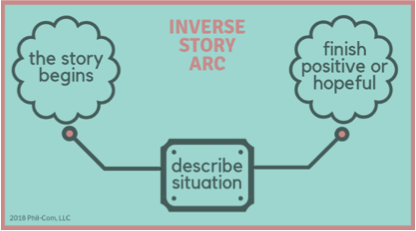 In an inverse story arc, you may need to take the reader someplace dark so that they understand the magnitude of the situation, but then you bring them back up to a positive resolution by illustrating how they can make a difference. In essence, you do not want to leave them depressed; you want to leave them educated and motivated.

As we close in on the two months of the year when the most money is invested in nonprofits, your organization will likely write a few appeals for funds. While you craft letters and emails, create videos or choose visuals that share your mission, keep the inverse arc in mind. Leave people feeling positive about their interaction with your organization and the good they are doing by investing in your mission.

4 Rules for Integrating Marketing Channels in 2023

How to Pay for Fundraising Costs: Can It Be Fast, Cheap and Good?