The donor made a $5,000 pledge, payable at $100 a month. She stopped giving, and the organization said nothing! This is an amazing story of ignorance and neglect. Ignorance in that a good fundraiser should know better. Neglect in that this good donor seriously was abused in this relationship.

I still can’t believe it! Here’s the story:

The organization came to this good donor and told her it had some match money. It said: "If you make a pledge to help right now, we have another donor who will match whatever you pledge, dollar for dollar." What a deal. This donor loved the organization and quickly decided that she would make a $5,000 pledge, payable in monthly installments of $100.

The organization gushed and fawned over her gift. There was plenty of love in the air.

Then the organization did a smart thing. It convinced the donor to pay the gift automatically out of her personal bank account each month. Perfect. Efficient. Good.

And then the whole thing started to go downhill.

The organization had secured the pledge and set up a fail-safe collection system. The money was, for all practical purposes, in the bank. End of story. Done. Finished.

And that’s how the nonprofit behaved. It had gotten its hands on the money. Now it was time to turn its attention to getting more money from other donors. Goodness, what a racket.

Well, when you treat donors this way, it is not surprising that they go away. Why? Because they feel used and unappreciated. So this donor kept giving—$100 a month automatic payment—over a number of years. Cha-ching! Cha-ching! And then it dawned on her that no one was paying attention. So, she called her bank and stopped the automatic withdrawals, and started sending in personal checks on an irregular basis.

Two things were going on at this moment. First, she struggled with whether this relationship was really worth it, so she gained more control of the transaction. Secondly, she wanted to see if anyone noticed.

On the organization side, it amazed me that no one did notice! The donor had changed her behavior. An automatic withdrawal had been cancelled. Payments were coming in irregularly. Hello! Please notice. Something is going on. Nope. Crickets.

At this point, you would think someone in the organization would say, "Where did the donor go?" Nope. Not a word. And here’s where the questions start coming. Did the organization really have a match? If it did, wouldn’t it miss this money? Did this donor’s gift really matter? Did the donor matter?

Whew. This is amazing to me. Still, to this day, this donor has not heard from the organization. No call. No letter. No "Hey, we miss you."

The major cause of donor attrition is that donors don’t think their giving is making a difference. Take a look at this chart. We start out with big promises and a lot of commitments when we first engage with the donors. We tell them what is going on and how they can help. We say their giving will make a difference. And if we do it right, we do show them their gifts made a difference, and they'll want to give again. That’s how it works when it is done right. The cycle goes round and round in a mutually satisfying way. 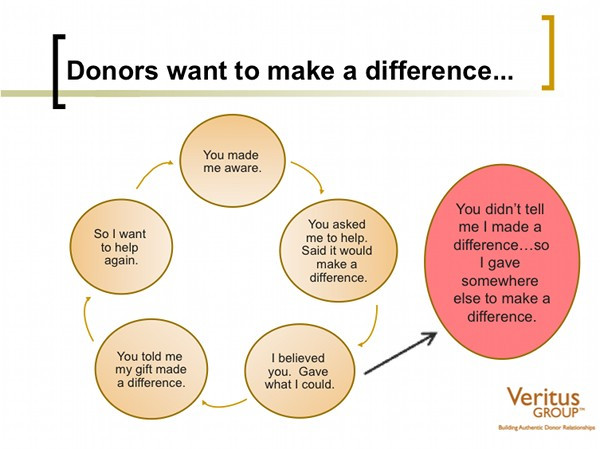 But to not tell the donor she made a difference, and to not miss her when she goes away and just disappears is pretty sad.

What system do you have set up so you know that a donor is missing? You really should check. And, more to the core issue is this question: What beliefs do you have about donors? Jeff and I always have advised you to value donors as partners, not sources of cash. Are you doing that? If not, there is trouble ahead.

Don’t treat a donor any differently than how you want to be treated.

What Can You Do for Donors During Thanksgiving Week?

Add a Monthly Gift Ask to Your Welcome Email Series

How Are Recurring Donors Doing in This Economy?

Are You Ready to Panic Yet?