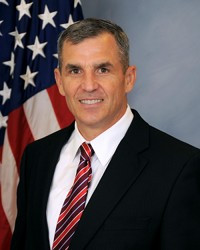 About five months after CBS aired harsh criticism of Wounded Warrior Project (WWP), leading the nonprofit to fire its CEO and chief operating officer, the organization has announced its hiring of a new leader.

WWP's board of directors announced last week that Michael S. Linnington, a veteran himself, will join the company at its Jacksonville, Fla., headquarters as CEO, effective July 18.

Linnington will oversee WWP day-to-day operations and determine its strategic vision to guide the nonprofit forward past a rough first half of the year that included defending its use of donations amid media reports and government inquiries that examined its spending. As CEO, Linnington also will help to ensure the organization's free, direct programs and services reach more than 100,000 veterans and their families.

"Mike’s extensive military experience and proven leadership credentials make him the perfect candidate to lead WWP," Anthony Odierno, chairman of the WWP board of directors, said in a statement. "Mike understands the unique needs of our nation’s veteran community, is a collaborative team-builder, and is deeply committed to fulfilling our mission of honoring and empowering wounded warriors. I am excited for WWP’s path forward under his leadership."

Linnington's 35-year military career has included three tours in combat operations and key command positions in numerous assignments around the world, as well as various awards for his distinguished service. Secretary of Defense Ash Carter appointed Linnington as director of the Defense POW/MIA Accounting Agency last year, shortly after he retired from the U.S. Army, where he most recently served as a lieutenant general. At the agency, he led the government’s efforts to research, investigate, recover and identify missing and unaccounted for personnel from past U.S. conflicts. He graduated from the U.S. Military Academy at West Point, N.Y., and earned a master’s degree in applied mathematics from Rensselaer Polytechnic Institute and a master’s degree in national security strategy from the National War College.

"I have long held the utmost respect and appreciation for Wounded Warrior Project’s vital mission, and I am excited to join them as CEO," Linnington said in a statement. "When our wounded veterans return home from combat, they rely on WWP and the organization’s dedicated team to provide necessary physical and mental health services, as well as economic empowerment and engagement programs that make a meaningful impact on their lives, and the lives of their families and caregivers. Being part of an organization committed to this important mission is a sacred duty and solemn responsibility. I look forward to working with the entire WWP team, including interim Chief Operating Officer Maj. Gen. Charlie Fletcher and the board of directors to continue to serve our nation’s bravest."

Fletcher has agreed to stay in his interim role through the transition period. The board anticipates adding up to four more board members by the end of 2016.

WWP forced out former CEO Steven Nardizzi and former Chief Operating Officer Al Giordano in March following a financial and policy review and donor concerns. The two spoke out in April to try to clear the air and maintain their innocence.