Why Nonprofits Hear About Artificial Intelligence From CRM Providers

One of the most rapid diffusions of innovation in human history is the creation and adoption of the internet. It started in 1989 and was considered widely adopted within a decade (61% of adults in the U.S.) — as noted by Everett Rogers in his talk at the University of Illinois at Urbana-Champaign. As we look back on it from today’s vantage point, the people adopting the innovation were urban, upper-middle class, computer owners. Access to computers was the critical driver to adopting the internet. To address this finding, community centers were set up in poor, rural areas to enable access to the web for the purpose of bringing on the late majority and laggards to this new innovation.

During the research for the “State of Artificial Intelligence in the Nonprofit Sector (SAINS),” our team found that 57% of nonprofit practitioners noted hearing about artificial intelligence (AI) primarily from their constituent relationship manager (CRM) providers. The fact that CRM providers are knowledge providers to new innovations (more than nonprofit associations or publications) means that CRM providers hold a unique power to influence decision-making when it comes to where nonprofit organizations will invest.

The SAINS report only touched briefly on the topic, so we wanted to dive more deeply into the topic. What we found was a few interesting takeaways. These are:

Let’s dive into each of these a little more. 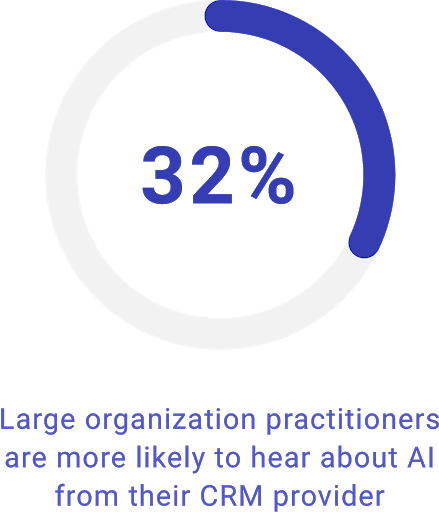 For instance, an organization with an entire team of fundraisers has to manage their data across those individuals, thus relying heavily on their CRM where an organization with only one to five fundraisers spends more time talking to other nonprofits and nonprofit associations, while doing more of their work more manually (e.g. Excel spreadsheets). 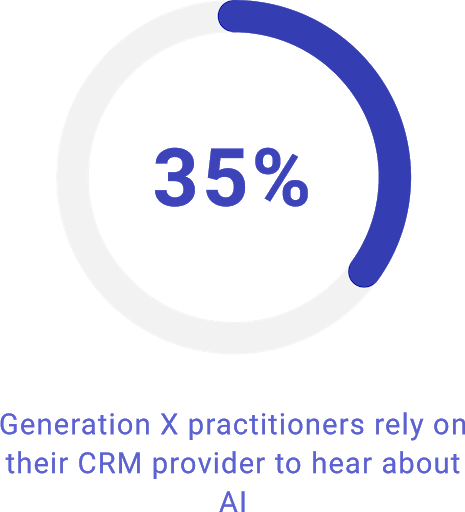 While 68% of practitioners who rely on CRM providers believe nonprofit AI aligns with their values and beliefs, innovators (44%) and early adopters (13%) rely less on CRMs and more on non-industry publications (31% and 33%, respectively) and other non-CRM technology providers for knowledge (33% and 37%, respectively). Since innovators in the sector are working directly with AI providers rather than relying on CRM providers as gatekeepers for new technology diffusion, this makes sense. Innovators and early adopters also rely on a number of external resources to learn about AI (2.5 and 2.8 resources on average).

Most People Believe We Need an Ethical Framework for AI 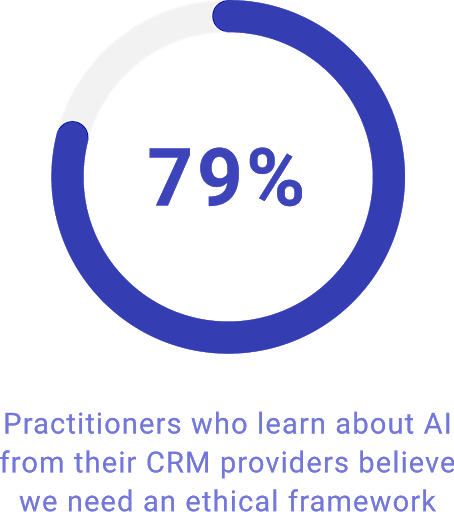 Most importantly, 79% of practitioners who learn about AI from their CRM providers believe an ethical framework needs to be in place before widespread rollout. This aligns with a number of trends happening in the world, including government regulation proposed to regulate AI and nonprofits focused on AI ethics.

As we continue to dive into the SAINS data, it is exciting to create profiles for how people learn about AI and where they sit along the diffusion of innovation cure. People who learn about AI from their CRM provider are likely to be Generation X’ers working in large nonprofit organizations who are somewhat early adopters of technology who believe we need to do more around AI ethics before fully rolling out AI broadly across the industry.

Free Resource: Have you downloaded the SAINS report yet? It’s the most comprehensive analysis of AI for social good available.

Jared Sheehan is the CEO of PwrdBy. He started PwrdBy in 2015 after leaving Deloitte Consulting, where he was a senior consultant in their supply chain sustainability practice and worked with clients such as TOMS Shoes, Starwood hotels and Panasonic.

Jared is a Lean Six Sigma Black Belt and has built numerous successful products in partnership with clients, including the Children’s Miracle Network Hospitals fundraising application, In Flight, which helps manage 75K+ corporate partners and raise $400M annually. Jared is the creator of the Amelia and NeonMoves mobile apps.

Tim Sarrantonio oversees Neon One’s ecosystem of software, consultant, and institutional partners that can address any nonprofit need. Neon One provides best in class products with NeonCRM, Rallybound, CiviCore, Arts People, and an ecosystem ensures that over 27 product integrations and over 90 consultants are working to solve problems specific to nonprofits.

How Affinity-Based Fundraising Changes Everything