What Nonprofits Have Learned From a Very Unpredictable Year

From an ongoing health crisis, to civil unrest, to a historic election: What organizations have learned, how to move forward and how to rebuild a strong foundation for the years to come

It’s safe to say that 2020 has been a year like no other, and it’s definitely a year that will be remembered for generations to come. This year has brought on so many uncertainties with no end in sight— from a pandemic that has killed nearly 375,000 Americans to date since January 2020, to a series of incidents bringing back into view the racial inequality and injustice that, unfortunately, is still prevalent in our society, to a presidential election that may be among one of the most contentious our nation has witnessed.

All of this said, 2020 has brought on a series of unfortunate events that have impacted everyone, the nonprofit sector included. But with a health crisis, civil unrest, topped with a very contentious election year, it seems fair to say that nonprofits are needed more than ever — to raise money and awareness for related causes. However, nonprofits have felt the burden and pressure of this year, especially at the onset of the pandemic.

Back in June, NonProfit PRO surveyed our audience to understand how the pandemic impacted nonprofits and how nonprofits have acclimated to their new environment. When asked how organizations have changed their approach during the pandemic, here’s how 350 survey participants responded in the following areas:

While the need for nonprofits to keep operations afloat has heightened, it clearly shows that many organizations had to make big changes internally and to their strategies in order to keep their doors open. One of the biggest lessons nonprofits learned this year is to never pull back on communication and/or fundraising in times of crisis.

In particular, food banks have been severely impacted by the crisis. Because of the health and economic crisis brought on by COVID-19, there was and still is a much elevated need for food banks. And food banks needed to figure out a way to serve more people, perhaps with limited staff members and volunteers, and figure out a strategy for safely getting food to the men, women and children who are hungry.

For this cover story, we are highlighting how the pandemic has affected one particular food bank, how it has pivoted and how it is preparing for 2021. Caring for Friends is a food bank that serves the five counties in the Greater Philadelphia area, including Bucks County, Chester County, Delaware County, Montgomery County and Philadelphia. To date, the organization’s senior meals program serves over 28,000 people, many of whom are homebound seniors and veterans. 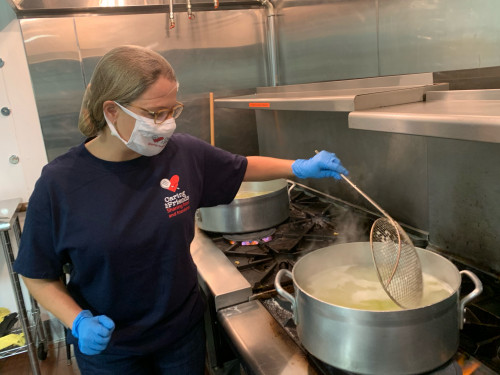 The image above shows Jeannette Fournier in action in the kitchen. | Credit: Caring For Friends

Jeannette Fournier, a proud immigrant, a three-time open-heart surgery survivor and a mother, serves as the executive director of Caring for Friends. When asked what drew her to the Philadelphia nonprofit, she said, “... the mission of food and friendship. Traditional food banks do a tremendous, amazing job getting food out the door and what I think is different about Caring for Friends is that we also get that soul-nourishing factor as well. We take the time to talk to people. We take the time to hang out and get to know them.”

As a food bank, can you talk about the challenges you encountered during the pandemic?

And we're still serving about 23,000 right now, and that's one-on-one, hundreds of one-on-ones, where our volunteers actually sign up with us. But there are dozens of churches that are bringing meals and groceries to seniors in their neighborhood every week. I'm still getting three to six calls a day from seniors asking for food. People who used to donate to us are now picking up. And it's heartbreaking, and it's never enough, but when you're trying to be that caring community, then it becomes natural.

In April, the pipeline broke down entirely. There was no more food coming into Greater Philadelphia. Luckily, we had restocked and reshaped our shelving earlier in the year. The strategy of just seeing how far we could push our capacity in January was a miracle because come April, we had food when others didn't, which is why so many people came to us.

In terms of things that have been really hard, this is where that disruptor Warby Parker mentality comes in with me, is trying to deal with bureaucracy in an unprecedented crisis that nobody could have planned for. What made us able to scale our three-year plan in three months, is the fact that we have three leaders. We hop on one phone call, like the Goldman Sachs people do it, and say, "Let's fix this problem." We don't have to have 12 phone calls. We were, in our innocence and ignorance, able to be very nimble and agile because, to us, it was, "These people showed up on our doorstep. Clothe and feed the hungry — let's do it. How do we do it? Who do we talk to?" If we hadn’t done what we did, we wouldn’t be helping over 100,000 people.

There's just no way. And so now we're making sure that we are doing surveys and we keep making sure our volunteers are happy. Of course we've had some staff turnover, all of that is normal when a new leader comes in, which is me and our CEO and board chair Vincent J. Schiavone. When we came in, we were disruptors by our very nature — he's an entrepreneur, and I'm a fundraiser. I tell it how it is, and all of that is very natural to me. It's not necessarily natural to people who've been doing it one way for 20 years. I never intended to be such a disruptor, but I just... I couldn't stop long enough. I couldn't stop long enough because in my head, every time I stopped, there was a whole neighborhood that didn't get their food.

Before the pandemic, did you have a protocol or a process in place for when a crisis occurs?

About 10 to 15 years ago, there was a situation where there were government discussions about shutting down individuals making meals for others because of food safety reasons. Our founder panicked and said, "What if we can't rely on donations? We'll have to make all those meals in-house instead. We can't leave our people in the lurch." So she set out to create a warehouse and a kitchen, so we have a 2,000-square-foot kitchen that is a production kitchen. And so when the crisis hit, we began producing meals like crazy.

At the height, we were making 10,000 meals a week because we could. Now it wasn't easy, and we were really tired and upset with each other and all the things that come with a high-stress situation, but we were able to keep supplying food however we possibly could to the people we had committed to supply food to.

What does that staff look like for you to create 10,000 meals a week?

We have a kitchen manager and a head chef, Abdellah Abdul-Qawi, and dozens of volunteers a day. He is actually the executive director of Muslims Serve. He's my equal, my peer and my friend, and he and I met at the Hub of Hope, which is a homeless facility underneath City Hall [in Philadelphia]. When we met him, we asked, "[Caring for Friends] has a kitchen that needs to be used more. Would you come and help us manage our volunteers and manage our kitchen production? And you can do whatever you need for your organization at no cost."

It's a fabulous partnership with two unlikely bedfellows. Because we didn't traditionally serve homeless organizations. It wasn't something that we necessarily did, not because we didn't want to; just because it was not something we'd grown to do organically over time, but now we do — including a dozen or so mosques that have caring kitchens as well. We've opened up entirely to a whole new Black and Arab mosque-serving world. And again, it's that caring community.
At our core, I think we all know that we're blessed to be around each other and to have these, I hope, lasting friendships.

The image above shows Caring for Friends volunteers cooking meals for seniors. | Credit: Caring For Friends

Looking back, what was your biggest lesson learned in 2020?

Trust my instincts. And I think that we don't give enough merit to the gut, which is ironic since I talk about those personal relationships all the time; but if something feels a little off in your tummy, chances are it'll come to haunt you. There have definitely been a few situations where I felt like, "That's too shiny and bright. That’s not real."

How is Caring for Friends preparing for 2021? What does that rebuilding stage look like?

Three things: First, we have created a food acquisition task force. So we have a cohort of very experienced tenured professionals who are kindly supporting us as external advisors in how to get food, where to get food and how to distribute food. The second, we just wrapped up discussions about budget, about how to put away for another emergency reserve. And then the third piece is gratitude. I’m going to call, meet with or write close to a thousand people between now and Christmas to just say, "Hey, thanks!" And my colleagues are going to do the same thing.

Editor's Note: This cover story was originally published in the November/December print edition of NonProfit PRO. Click here to subscribe.

How to Thrive With Multiple Streams of Revenue

Post-Pandemic Considerations for Your Marketing

Elements of Nonprofit Leadership in 2021