San Francisco area charities surrounding Sunday’s Super Bowl host city, Santa Clara, Calif., benefited from 50 Fund, Super Bowl 50’s philanthropic arm, which raised more than $12 million, a record for the game’s host committee. But nonprofits near Levi’s Stadium weren’t the only ones to receive donations as a result of the big game. The competing cities also wagered charitable efforts based on the game’s outcome or conducted fundraising efforts to create secondary competitions off the field.

With a bet between states, Colorado Gov. John Hickenlooper and North Carolina Gov. Pat McCrory offered to donate local-made goods to the opposing team’s state, according to a press release. Since the Denver Broncos came out on top, McCrory will donate 50 cases each of Butterball turkey burgers and turkey sausages to a Colorado food bank, as well as a dog food donation to a Colorado animal shelter. If the Panthers would have won, Hickenlooper agreed to give 50 Osprey backpacks filled with school supplies to a North Carolina shelter, and 50 cases of Pueblo Salsa, 500 boxes of crackers and 500 packages of sausages to a food bank in North Carolina.

But there was more to the wager, Hickenlooper disclosed this week to CBS Denver.

“I made a bet with Gov. Pat McCrory of North Carolina that I would have had to dye my hair powder blue if we lost,” he said. “Thank God the Broncos won! The Broncos came through, but he’s going to have to take my jersey, my Broncos jersey, and wear it in the state capitol for a day, and he’s also going to have to wear an Orange Crush earring for a day.”

The cities’ mayors also made a friendly competition by agreeing the losing city’s mayor would volunteer in the winning mayor’s city. Therefore, Mayor Jennifer Roberts of Charlotte, N.C., will be partaking in a day of service with AmeriCorps in Denver. Charlotte, N.C., ranks fourth among large cities for volunteering and service while Denver ranks 13th in the same category, according to the Corporation for National and Community Service, which has helped to organize Super Bowl community service bets since 2013.

“I’m proud to work with Mayor Roberts and the city of Charlotte to highlight the importance of giving back to the community,” Denver Mayor Michael Hancock said in a statement prior to the game. “Regardless of the outcome of the game, volunteering within the community not only makes a direct impact on our lives, it strengthens our communities.”

Roberts also will have to post a picture of herself in a Broncos jersey on her Twitter account, according to The Denver Post. Hancock lost the Super Bowl bet with Seattle’s Mayor Ed Murray in 2014, for which he auctioned off six Denver-themed items, with the proceeds going to the Lifelong AIDS Alliance in Seattle.

The leaders of the opposing team’s regional economic development organizations opted to have the loser donate to a cause and sing along to a fitting tune. Ronnie Bryant, CEO of Charlotte Regional Partnership, had to sing or lip sync John Denver’s “Rocky Mountain High” (he chose lip sync), send local foods to the Metro Denver Economic Development Corp. and its CEO, Tom Clark, and contribute a donation to Denver’s NFL Play60 nonprofit, according to the Denver Business Journal. Had the Panthers won, Clark would have sung James Taylor’s “Carolina on My Mind.”

Businesses even got in on the fun with breweries agreeing to submit a donation based on the winning team’s mascot. Had the Broncos lost, Colorado’s Lone Tree Brewery would have donated to the Carolina Tiger Rescue, which assists all wildcats, but instead Sycamore Brewery in Charlotte, N.C., will donate to the Colorado Horse Rescue.

Some religious groups took part in bets, but with a twist that allowed both sides to be winners regardless of the outcome. Two rabbis from both cities—Joe Black of Denver and Judith Schindler of Charlotte, N.C.— set up a Fundly page with a goal of $5,000 for its “Super Mitzvah.” The crowdfunding effort surpassed the goal, tallying $6,105. Black received two-thirds of the donations for his charity of choice, Lunchbox Express of the Denver Jewish Family Service, while Schindler received the remaining third for Shalom Park Freedom School. 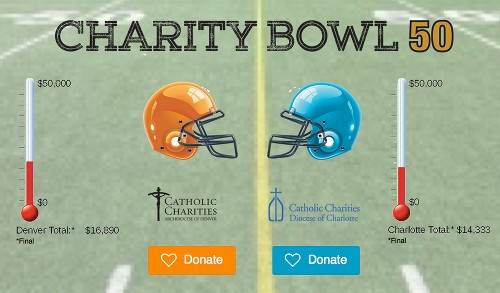 Catholic Charities created a similar mission between its Charlotte and Denver archdioceses, but the organization that raised the most money in its Charity Bowl 50 determined the winner and loser. The competing cities raised more than $31,000 with Denver raising about $2,500 more. Now the CEO of the Denver charity will allow employees to dump cold sports drink over his head during a victory celebration while the Charlotte charity will have to send a video message to the Denver nonprofit while wearing Broncos’ colors.

“The generosity of all who donated food is inspiring,” said Rev. Amy Coles, assistant to Bishop Larry Goodpaster of The Western North Carolina Conference, which contributed to the drive. “Together, we’ve made a positive difference in the food insecurity of our neighbors.”

Walmart Launches Spark Good Round Up and Registry for Nonprofits