Study: Nonprofit Employee Engagement Is Kind of a Mess 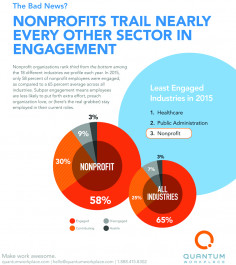 Given its collective mission—changing the world—you might expect the nonprofit sector to be filled with starry-eyed, idealistic individuals whose passion for the cause is motivation enough to show up to work each day. But, as it turns out, changing the world is kind of a grind.

According to “Engaging Nonprofit Employees,” a new study from Quantum Workplace, the nonprofit sector has some serious engagement issues. In 2015, just 58 percent of employees were engaged, and a combined 12 percent were disengaged or hostile. The numbers place the nonprofit sector third from the bottom among the 18 industries included in the study, outranking only health care and public administration. Yikes.

Even worse, the sector saw active disengagement rates exceed the national average for the fourth straight year. And while the 3.1 percent hostility rate was less than a full point higher than the 2.4 percent average for all industries, the study notes that hostile employees often negatively affect coworkers.

So, what can nonprofit leaders do to reverse the trend? The study offered a few insights:

The study also provided some tactics real nonprofits are using to boost engagement. Goodwill of Central Arizona, for example, shares progress updates linked to employee feedback. Nebraska Families Collaborative uses comprehensive employee surveys. These approaches hint at a simple but often overlooked way to keep employees engaged: Give your people a voice—and listen to what they have to say.

There's a lot more in the study, so download the full thing here for more.