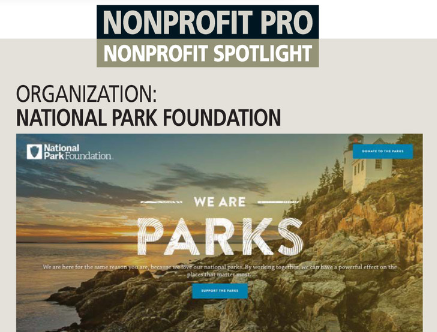 We all can agree that capital campaigns can be a bear, but the final outcome always outweighs all the blood, sweat and tears spent on the project. NonProfit PRO wanted to highlight a nonprofit doing great things—in specific, one that launched a very successful capital campaign.

The National Park Foundation is the official charity of America’s national parks—all 400 of them. And they work with the National Park Service to connect Americans to these parks and preserve them for years to come.

King Laughlin, VP of major giving at the National Park Foundation, understands that capital campaigns can be complicated to devise and manage, but the benefits are always worth it. These benefits include bringing together the organization’s leadership team and staff; energizing donors around a common goal; and responding to an urgent need.
The Flight 93 National Memorial was created when President Bush signed into law the Flight 93 National Memorial Act, which created a new national park to remember the 40 passengers and crew members of Flight 93 who gave their lives on Sept. 11, 2001. According to Laughlin, this capital campaign raised over $40 million from 110,000 individuals, foundations and corporations to establish, design and build the national memorial to honor the heroes of Flight 93. This flight was United Flight 93 that fought back against the hijackers from Sept. 11, which prevented a second aerial attack on Washington, D.C.

The success of this campaign was mainly attributed to a desire that existed on a national scale due to the events that occurred on Sept. 11.
“I believe many individuals rose to the occasion and gave of themselves to ensure that the heroism displayed on Sept. 11 will be preserved, shared and honored for generations to come,” Laughlin said.

Unique strategies that the organization implemented into this campaign included a mix of traditional and innovative fundraising and marketing strategies. The National Park Foundation partnered with EarthCam to broadcast the construction of the memorial, which gave people the opportunity to see the transformation of the site. But this didn’t come without challenges.

In addition to time constraints, the challenges the organization encountered were that they had to build an infrastructure and partnership from scratch to support the park. Shankville, Pa., the location of the park, had no corporate or philanthropic structure to rely on. But the organization viewed this as an opportunity, because while these were hurdles along the way, they were welcomed with a tight-knit community that was dedicated and was eager to help in any way they could.

“When an engaging story and a compelling need intersect, anything is possible. The messages of Flight 93 about bravery, about community, about generosity don’t just exist on Sept. 11; they inspire people year-round and year after year,” Laughlin said. “It’s important to always be thinking about how your cause resonates with the public, such as, how do we share the story of Flight 93 with younger generations who did not experience the tragic events of Sept. 11? Or how can we thoughtfully restore this land to be a lasting tribute?”

How To Make Your Capital Campaign Less Risky

What Is the Biggest Year-End Fundraising Mistake a Nonprofit Can Make?
Comments
Subscribe
Find Resources