Retail Attractive Events: Events that often are competitive and exclude certain people due to the activity or cost of participation—be it money, time, etc. They typically charge a fee for registration and have a mandatory fundraising minimum. (Think runs, endurance events and similarly competitive activities.)

Retail Unattractive Events: Events where participants can, but aren’t required to fundraise. They participate because it is associated with the cause, rather than the physical activity. (Think walks and non-competitive runs.)

Recognition Seeker: A participant who earns a gift for raising a particular amount and actually redeems the gift.

Recognition Decliner: A participant who earns a gift for raising a particular amount, but decides not to redeem it.

Merci. Danke. Grazie. Gracias. Arigato. There are countless ways to say “thank you,” but they don’t all have to be verbal. In fact, when it comes to peer-to-peer (P2P) fundraising events, it’s often difficult to provide a verbal acknowledgement to each volunteer and supporter. So many organizations turn to the tangible “thank you”—items that represent the organization’s recognition, appreciation, acknowledgement and thanks for the individual’s support.

But how much power does a “thank you” have?

The “2016 Turnkey Benchmark Study on Peer-to-Peer Fundraiser Recognition” sheds some light on the question.

It looked at two case studies that measured trends over time. In both instances, the gifts offered weren’t large enough to be misinterpreted as financial incentive.

The first case study took a look at a retail unattractive event (see sidebar for definition of bolded terms), a large client's fundraising walk with more than 200,000 participants per year to examine how the different types of recognition earners—recognition seekers and recognition decliners—performed in the second year. 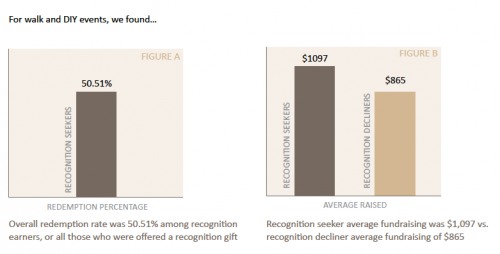 The second case study looked closer at a retail attractive event, a cycling event for a client that has a program with more than 8,000 participants. Again, Turnkey looked at the performance of recognition seekers and recognition decliners.

What is this market relationship? Think of it as a transaction. Participants do something for the organization (like participate in an event) because they are extrinsically motivated by money (or things that have a price). Money and similar “gifts” undermine people’s attachments to the cause by adding financial incentives (including experiences they would pay for).

In contrast, social incentives (and social relationships)—like “thank you,” or a tangible, non-financial incentive—reinforce one’s own intrinsic label and help the person identify with the cause.

The study doesn’t point to one type of event as better than the other. But it does show the value of recognition seekers—and, consequently, the importance of the tangible “thank you.”

While recognition decliners are, in most instances, above industry standards, recognition seekers are the ones who are more likely to raise more, return to fundraise more often and indicate potential high retention and fundraising rates for the future.

To delve into the full study, download it here.

The study, which reflects the research of 93 programs from 33 different organizations in the U.S. from Jan. 2012 to Nov. 2015, focused on recognition applied through emails and branded gift offers for volunteers who performed high-level fundraising.

Save Yourself! Don’t Use ‘Donor’ as a Segment