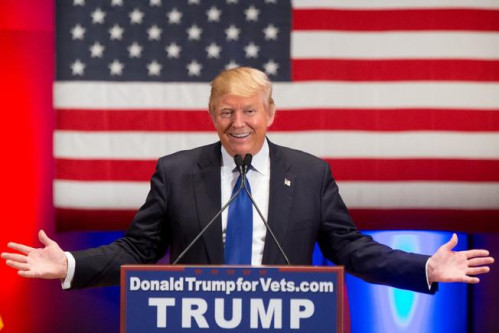 Maybe the third time is the charm for Donald Trump.

Unlike Trump’s antics in September and December when he demanded CNN donate the debate proceeds to veterans charities or risk the Republican Party’s frontrunner not showing up, this time he promised to boycott the debate outright after failed attempts from his camp to get Fox News Channel journalist Megyn Kelly—who Trump repeatedly has spoken out against after a prior debate encounter—removed as a debate moderator.

Well, until Thursday—the day of the debate.

Trump said that Fox News had apologized and made multiple calls to him throughout the day asking him to attend the debate, Time reported. In response, Fox News released a statement that said there had only been “three brief conversations,” and “Furthermore, Trump offered to appear at the debate upon the condition that Fox News contribute $5 million to his charities. We explained that was not possible and we could not engage in a quid pro quo, nor could any money change hands for any reason.”

• Failed or Not, Trump’s ‘Donate or No Debate’ Demands Raise Ethics Concerns

• Trump: If CNN Wants Me to Debate, It Should Donate $10 Million to Charity

Another GOP debate, another Trump demand for a donation to charities in exchange for his presence. We can’t say we were surprised. We had hoped this “strong-arm philanthropy,” as we called it, was done with. But, we knew better.

At least this time he kept his promise. Trump was a no-show at the debate.

Instead, he opted to hold a “special event to benefit veterans organizations” at Drake University in Des Moines, Iowa—just two miles away from the Iowa Events Center where Fox News hosted its debate. His event also began at the same time as the primetime debate.

According to a press release from Trump’s camp following the rally, the event raised $6 million for veterans—a $1 million personal contribution from the frontrunner and an additional $5 million before the one-hour event concluded. In the same release, it stated that 22 veterans organizations would benefit from the funds raised.

Going into the event, it had become a point of discussion that in all of Trump’s build-up of the event, he had yet to specify which organizations (or what specific veterans’ needs) would benefit from the rally.

It was particularly noticeable when Trump launched www.donaldtrumpforvets.com, a site for his supporters to donate to the cause. It states that “100 percent of your donations will go directly to veterans needs,” but lists no particular organizations—other than the Donald J. Trump Foundation—that the money would go toward.

Prior to the announcement of which charities would be receiving the funds, several charities were vocal about whether or not they wanted to be associated with the event—or would even accept any such funds from the event if asked.

Paul Rieckhoff, founder of Iraq and Afghanistan Veterans of America, tweeted on Wednesday that his organization would not accept any donations from the event, or as he called it, the “political stunt.”

If offered, @IAVA will decline donations from Trump's event. We need strong policies from candidates, not to be used for political stunts.

In the other camp, K9s For Warriors, a nonprofit the Trump Foundation has supported previously and one of the 22 organizations eventually announced to benefit from the rally, told CNN ahead of the announcement that it hoped it would be on the receiving end of the donations.

“While we’re a non-partisan organization, we are busy trying to stop the crisis of 22 veterans committing suicide every day, and we are thrilled to take funds from Mr. Trump—no problem,” Rory Diamond, executive director of the nonprofit, told CNN.

No matter your political leanings, we can all agree that $6 million donated to veterans charities is a good thing, right? But how much does the reason behind the donation matter?

Was this a generous philanthropic move from Trump that proves his dedication to veteran affairs? Or was it a shield to defend his decision not to attend the debate due to prior “unfair” treatment?

Do motives matter—or should we just be happy that charities received $6 million?

It’s a question worth asking. Especially in the face of a presidential election.

“Mr. Trump has been a major supporter of veterans organizations throughout his life and has made strengthening our military, reforming the VA and taking care of our great veterans cornerstones of his campaign,” Trump's post-rally press release read.

But that doesn’t match with the Trump Foundation’s history, Forbes recently reported. Between 2009 and 2013, the foundation donated $5.5 million to 298 charities according to its 990 tax forms. But of that total, “only $57,000 has been donated to seven organizations that directly benefit military veterans or their families.”

But Trump wasn’t the only GOP nominee who engaged in some questionable philanthropic tactics.

The same night Trump announced he would not participate in the debate, presidential candidate Ted Cruz challenged Trump to a head-to-head debate. “I would like to invite him on your show to participate in a one-on-one debate, between me and Donald, mano a mano,” Cruz said in a radio interview with Mark Levin, CBS News reported. He also reserved a venue, time and place for the debate—which would have happened Saturday if Trump accepted. (He didn’t. Instead, he mocked the idea in a tweet.)

According to Breitbart, the organizations issued a press release that read:

In response to Sen. Ted Cruz’s challenge of a one-on-one debate, the principal donors of the Keep the Promise I and II super PACs are offering presidential candidate Donald Trump a truly fantastic deal, pledging to donate $1.5 million to charities committed to helping veterans if Mr. Trump agrees to debate Sen. Cruz in Iowa.

Then, presidential candidate Carly Fiorina, who was a participant in the earlier undercard debate on Thursday night, upped the ante on Twitter.

My campaign will also donate $1.5 million to veterans' cause to join debate Saturday in Sioux City, @tedcruz @realDonaldTrump (1/2)

Upping the ante, I'm free tomorrow at 8pm, @realDonaldTrump. My campaign will give $2mm to veterans' cause to debate at Drake U. (2/2)

If. These massive donations are predicated on if Trump agrees to these side debates. So, what if he doesn’t participate (which he didn’t)? What happens to that money for veterans? Does it equate to an unpaid ransom demand?

When we covered Trump’s “donate or no debate” tactics the first couple times around, we stripped away the cover of philanthropy. “Demanding that CNN donate to charity ‘or else’ is essentially extortion. And Trump naming veterans charities—specifically 'Wounded Warriors'—in his demands is outright exploitation,” Sean Norris wrote.

He posited, “using charity as a political crowbar is the antithesis of what philanthropy should be about; using veterans charities is worse.”

This is just a continuation of the same.

As of now, there are five remaining GOP debates scheduled to take place, which means plenty more chances to exploit charities for the sake of politics. It also means there are ample opportunities for the candidates to prove they’ve learned that philanthropy—that millions of dollars that could be donated to good causes—isn’t just something to promise only if they get their ways.