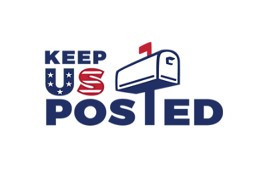 Keep US Posted, an alliance consisting of consumer interests, industry groups, newspapers, nonprofits and businesses, applauds Congressmen Gerry Connolly (D-VA) for taking action to address unprecedented postage hikes, like those than occurred in January and July of this year and planned for every six months moving forward. The Ensuring Accurate Postal Rates Act, whose original cosponsors include Reps. Jake La Turner (R-KS) and Sam Graves (R-MO), requires the Postal Regulatory Commission, which governs the U.S. Postal Service, to review the authority given to Postmaster General Louis DeJoy in 2020 allowing him to continue raising postage at a historically high clip.

Yoder continued, “If DeJoy’s frequent postage hikes are allowed to take place, Americans could soon be paying well over $1 to mail a single letter, and mail-dependent industries will suffer. The January rate increases will not only raise postage for an unprecedented second time in one year, but will impact industries that depend on the mail to serve the public, such as newspapers, which faced a 9 percent postage increase, and nonprofits, whose mail costs increased more than 6 percent. We can’t let the Postal Service sabotage itself by driving industries out of business and driving consumers away from using the mail. It’s a relief to see Congress step in to ensure that mail service remains accessible to all.”