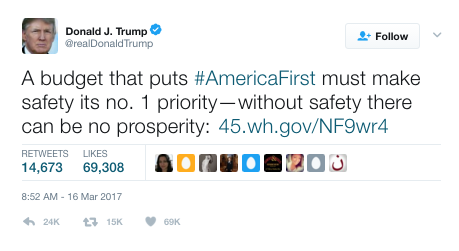 Which Budgets Would Be Cut?

This is a blow to many nonprofits across the nation because many organizations receive a large chunk of their funding from the government. Without it, these organizations will have to look for alternatives to replace the funding that will be lost—and it’s no small amount. 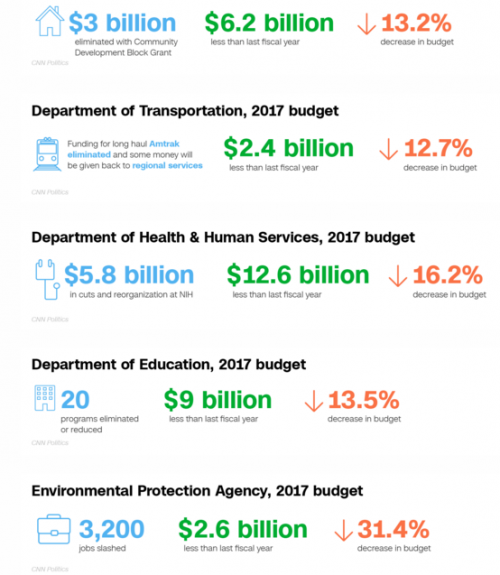 Under the proposal, the Department of Agriculture will face a $4.7 billion (21 percent) decrease from its FY 2017 budget. The proposal suggests that the department receive $17.9 billion. The cuts will eliminate the Water and Wastewater loan and grant program (a cost of $498 million).

The Department of Education will receive $59 billion—a whopping $9.2 billion (14 percent) decrease from its budget in FY 2017. According to the Washington Post, Trump’s proposal would “eliminate a raft of grants, including teacher training, afterschool programs and aid to low-income and minority students,” and invest $1.4 billion in charter schools, private schools and other school-choice initiatives.

The Department of Health and Human Services would suffer a $15.1 billion (18 percent) decrease from the $84.1 billion budget in FY 2017 to a proposed $69 billion budget in FY 2018. Medicare and Medicaid would be excluded from the budget, and the budget increases funding for prevention and treatment of those dealing with opioid addiction. While the National Institutes of Health (NIH) had a $2 billion increase in 2016 and in 2017 under former President Obama’s administration, Trump's budget outline decreases funding by $5.8 billion. The budget would also eliminate the Fogarty International Center, a $69.1 million program that globally builds partnerships between health-research institutions.

The possibility of a nearly 20 percent cut to NIH’s budget has outraged leaders in the scientific community, with many saying this newly proposed budget would be the lowest budget in 15 years and would “cripple the nation’s ability to support and deliver biomedical research,” according to the Association of American Medical Colleges.

“The nation would lose research and researchers in a way that would not be recoverable. It is pretty terrifying.” — Kathy Hudson, former NIH deputy director

Just yesterday, the Trump administration proposed an immediate $1.2 billion budget cut to the NIH for the remainder of 2017. If this goes into effect, the Centers for Disease Control and Prevention would suffer a $314 million cut and the FDA would suffer a $40 million cut, as reported by Genetic Engineering & Biotechnology News.

According to the Trump's budget blueprint:

Trump's budget outline proposes that the Department of State and U.S. Agency for International Development (USAID) and Treasury International Programs receives $25.6 billion in FY 2018—a $10.1 billion (28 percent) decreased from FY 2017. The budget would include $12 billion for Overseas Contingency Operations funding for outstanding costs “primarily in war areas like Syria, Iraq and Afghanistan”—a total agency cost of $37.6 billion.

In response to the proposal, Catholic Relief Services (CRS), a nonprofit dedicated to providing aid to people in more than 100 developing countries around the world, released a statement saying that they are “deeply troubled by the proposed draconian cuts to poverty-focused foreign assistance in the administration’s budget request. At a time of both increased need in the world and genuine progress against poverty, such cuts to the Department of State and USAID would have devastating and long-lasting effects, both around the world and here in the U.S.”

“This proposed skinny budget is way too skinny to meet the increasing needs that left unaddressed will cause greater displacement and insecurity. The 1 percent of the budget that goes to poverty-focused foreign aid is one the best investments the U.S. makes.” — Bill O’Keefe, vice president for government relations and advocacy at CRS

Nonprofits Against the Budget Blueprint

CRS is not the only nonprofit to speak out against the budget blueprint. If you simply Google “budget blueprint + nonprofit,” you will find that numerous organizations have released statements on this topic.

Meals on Wheels, a nonprofit organization dedicated to providing meals, visits and safety checks to approximately 2.4 million senior citizens across the nation through their 5,000 community-based programs, receives about 35 percent of their funding from the federal government. Meals on Wheels receives funding through the Community Development Block Grant program, which is being threatened by the budget blueprint. The organization has started a petition that urges the President and Congress to protect the organization’s funding. If you want to read more about or sign the petition, click here.

“The need is growing rapidly, and federal funding has not kept pace. The network is already serving 23 million fewer meals now than in 2005, and waiting lists are mounting in every state. At a time when increased funding is needed, we fear that the millions of seniors who rely on us every day for a nutritious meal, safety check and visit from a volunteer will be left behind.” — Meals on Wheels 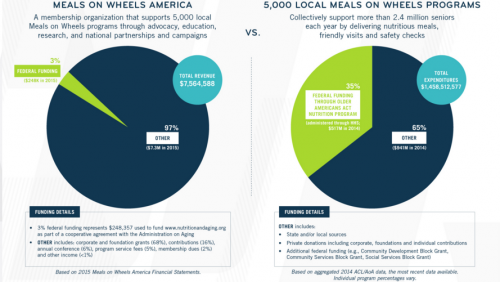 Image via Meals on Wheels

In a statement released by the Elizabeth Glaser Pediatric AIDS Foundation, the organization openly expressed its concerns about the proposed cuts to foreign assistance, saying the these cuts would “threaten to roll back stunning progress made in recent years toward the goal of ending AIDS in children globally.” The organization reported that the number of infections in children has decreased by 70 percent worldwide and nearly 2 million infants have been born free from HIV, which has been attributed to the nation’s leadership and support. The new budget cuts would not only hinder the astronomical progress in reducing the number infected, but—even worse—it could be reversed.

“It is imperative that we continue to build on the momentum created by U.S. leadership. A world where no child has AIDS will remain out of reach if U.S. commitment on foreign assistance wavers. A world where no child has AIDS sets the stage for the end of HIV/AIDS as a public health crisis. Still today, 400 children are newly infected with HIV daily, and only 49 percent of the 1.8 million children living with HIV have access to the medications they need to stay healthy, so clearly there is more work to do to reach our goal.” — Elizabeth Glaser Pediatric AIDS Foundation

The Modernizing Foreign Assistance Network (MFAN) announced its grave concern for the proposed budget cuts saying the newly proposed cuts are “fundamentally reckless.” The organization highlights that the budget should reflect the realities—65 million people who are homeless, four famines and several political crises—and provide USAID the means to address those concerns. The organization also pointed out the “long-standing bipartisan agreement on Capitol Hill,” which requires effectual foreign assistance, such as the Millennium Challenge Corporation, the President’s Emergency Plan for AIDS Relief and Foreign Aid Transparency and Accountability Act. These contracts support aid that is driven by results.

“The cuts proposed by this administration are fundamentally reckless. Congress should reject this budget because it would cripple our country’s ability to engage with our allies and confront global threats.” —George Ingram, co-chair of MFAN

The Heritage Foundation released a report titled “Blueprint for Balance: A Federal Budget for Fiscal Year 2018” outlining the following:

• Detailed recommendations for the country’s economy, society and defense throughout the budget process.
• Programs, which produce favoritism that are wasteful or would be better managed by state or local governments, are eliminated or reduced.
• The federal budget should reflect American principles within constitutional constraints and a commitment to individual rights, economic freedom and prosperity.

The budget blueprint threatens many organizations' mission for societal change—whether it's feeding the hungry, providing shelter to the homeless, providing medical aid to those in need. Many nonprofits will be facing some harsh realities if this budget comes into play. Those that are receiving federal funding will be forced look for alternatives. How will they cope?

Even Republicans are expressing their skepticism toward this preliminary budget blueprint. Senator John McCain of Arizona said in a statement, “It is clear that this budget proposed today cannot pass the Senate.” The full budget blueprint outline is expected to release some time in May.

What are your thoughts on Trump’s proposed budget? Will give the U.S. the economic boost it needs, or will it hinder its progress?

How to Increase Donor Giving Dramatically

How to Pay for Fundraising Costs: Can It Be Fast, Cheap and Good?
Comments
Subscribe
Find Resources