When last we checked in on Dryer Lint Donald Trump, he was running unopposed in the race for the coveted title of "artistic work most likely to simultaneously instill existential horror and admiration." But now, finally, he has a challenger. 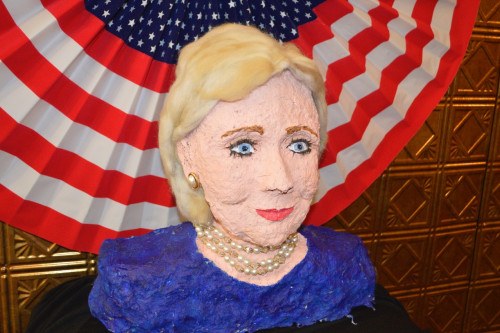 And for good measure, here are the two candidates side by side in a rare moment of amicability: 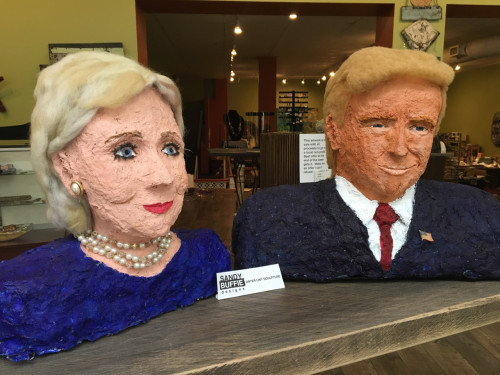 Dryer Lint Hillary, like her orange-tinged predecessor, is the work of Cleveland-based artist Sandy Buffie, proprietor of Sandy Buffie Designs. In her press tour of sorts following Dryer Lint Donald's unveiling for the Republican National Convention, Buffie promised Hillary was on the way. And she didn't let us down.

Once again, the level of detail is stunning, if firmly in the uncanny valley. The pearls are a nice touch, as are the pronounced cheekbones and pursed lips—all hallmarks of the Democratic presidential nominee. (No word, however, if Dryer Lint Hillary also maintains a private email server.)

As with her Trump sculpture, Buffie plans to auction Hillary, with proceeds going to Center for Arts-Inspired Learning, a Cleveland charity where Buffie serves as a board member. She's taking bids on both sculptures until November, but she's got some other fundraising ideas in the interim.

"I am planning to continue to take donations for photos, as well as host a fundraiser dinner party," Buffie told us. "Both candidates will be at the heads of the table and it will be a formal, catered affair. People will buy tickets for a plate just like a political fundraiser. There will be opportunities for photos with the lint candidates, as well as dancing with them."

"I am also planning a Hillary and Trump Halloween party and everyone has to come as one or the other," she added. "Imagine a room full of Donalds and Hillarys!"

Check out a few more photos of Dryer Lint Hillary and some of Buffie's other designs here.

Related story: Here's a Donald Trump Made From Dryer Lint That Will Haunt You Forever (But Also Raise Money for Charity)

10 Secrets for a Successful Auction

4 Essential Checklists for Every Event Planner

Auction Inspiration: 101 Ideas on How to Get Great Items for Your Charity Auction