Debunking Myths Around What You Think You Know About Direct Mail

According to legend, a reporter asked Mark Twain what comment he had about the rumor he was dead. As the story goes, Mark Twain replied, “Reports of my death have been greatly exaggerated.” The same could be said of direct mail or direct marketing, as one might be led to believe that everything is online these days and “direct mail is dead.” But that would be a myth, as the results tell us otherwise.

Effective direct response marketing includes a multichannel and targeted approach to reaching your audience via direct mail, email, social, mobile, web-based advertising and even traditional media buys. So let’s look at some of the big myths around direct mail.

Myth No. 1: Direct Mail Is Dead

Direct mail generates more than 80% of direct marketing revenue when compared by channel. It is the single largest source of direct marketing revenue for fundraising by a longshot. Why is it so effective? It very accurately targets and personalizes to your audience. Approaches can be effectively measured and tested, and there is a much longer shelf life (six to eight weeks) as a call-to-action than other channels. 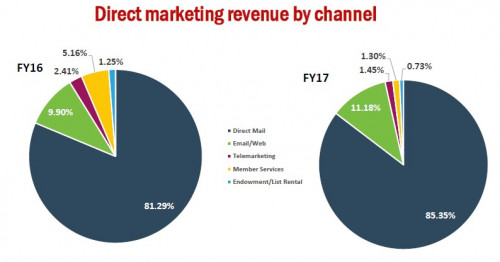 Myth No. 2: Today’s Donors Prefer to Give Online

Online giving as a percentage of total fundraising is only 8.7%, according to Blackbaud’s “2019 Charitable Giving Report.” While that figure is growing, it is not doing so at an exceptionally fast rate given that it represented 7% of total giving in 2012. Additionally, according to Blackbaud’s “50 Fascinating Philanthropy Stats,” 32% of online donors will make their next year’s gift offline.

Myth No. 3: It’s Not the Way Our Organization Raises Money, and It’s Too Late to Start Now

Developed in the 1960s by marketing guru Ed Mayer, known as the 40/40/20 rule, an effective direct response fundraising campaign comes down to three key elements: 40% is audience, 40% is offer and 20% is creative. A targeted audience segmentation strategy working within your organization’s own database or through an external list purchase or rental paired with an effective and compelling “ask” will drive 80% of your success rate. Find a qualified data partner to assist you in your segmentation efforts (the goal is not to send more letters, but to send them to the right prospects), and make sure that you embrace direct mail best practices when it comes to copy and creative. “Pretty” doesn’t typically win the day when it comes to successful gift procurement. But effective visuals and messaging that resonate can drive success and a return on your investment.

A couple of years ago, we took on a client that was brand new to direct response fundraising. It just wasn’t a part of “its culture.” Now two years later, it has generated over $1 million in gifts from 11,500 donors, with over 400 long-lapsed donors reinstated and more than 2,400 new donors acquired, so it’s never too late to start.

With COVID-19 challenges causing us all to re-evaluate our norms and processes, and most of your donors continuing to spend an inordinate amount of time at home, now might be a good time to revisit your direct response marketing and fundraising strategies. It can be a very effective tool in your fundraising toolbox.

With nearly three decades of experience in the philanthropic sector, Alicia M. Lifrak is a Certified Fund-Raising Executive with demonstrated success in leadership, strategic planning, operations, budget management, board leadership, membership, program, marketing and all forms of fundraising. She is driven by a focus on developing and implementing strategic solutions that yield the best possible results in pursuit of mission achievement.

After moving around the U.S. for most of her life, Alicia now lives in Illinois with her four kids, a cat and a dog. She travels frequently, for work and for fun, is an avid reader and loves to see live music.